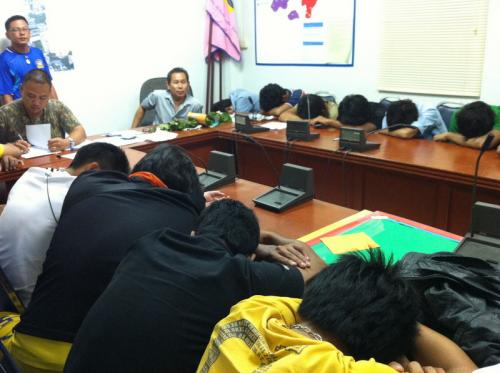 PHUKET: A raid on a Phuket Town pharmacy early yesterday evening turned into a bumper haul for officers as they arrested a procession of youngsters turning up to buy cough syrup specifically to make the local drug cocktail “4×100”.

Following an order by Muang District Chief Supachai Pochanukul, the 15 officers arrived at the Pharma Sure drug store on Si Sena Road (map here) at 6:30pm.

“We received a tip-off that the store was selling cough syrup to be used to make the ‘4×100’ drug cocktail,” said Muang Chief Administrative Officer (Palad) Thammarong Chuayaksorn.

“The store was open each day only from the afternoon until 7:30pm,” he added.

When the officers arrived, the only person at the store was counter service staffer Mathuros Chumchuen. “She told us the pharmacist was not at the store at that time. We asked to see the register of drugs bought and sold by the pharmacy, as required by law, but she could not produce it,” Mr Thammarong said.

The officers then called in store owner and pharmacist Theerawat Khumnil, 30, a Trang native, for questioning.

“While we were talking to Mr Theerawat, a total of 24 youngsters aged 20 and 21 years old came in to buy cough syrup. I pretended to be working at the store and they all told me they wanted to use the cough syrup to make 4×100,” Mr Thammarong explained.

“So we arrested them,” he added.

Officers discovered that several of the youngsters were carrying kratom leaves – another ingredient in 4×100 – in their shorts.

“He accepted all the charges and was taken to Phuket City Police Station for further questioning,” Mr Thammarong said.

All 24 of the youngsters, two of whom were Burmese, were taken into custody and will now attend a compulsory drug rehabilitation camp.

Phuket Sports: TNT blown away in a flash by Gordon