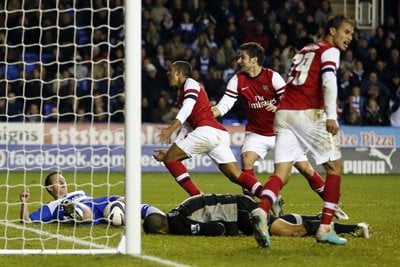 Reuters / Gazette Editors
PHUKET: Arsenal battled back from 4-0 down to beat top-flight rivals Reading 7-5 last night, powering their way into the League Cup quarter-finals after one of the most extraordinary matches in the competition’s 52-year history.

Manager Arsene Wenger said last week that the League Cup was at the bottom of his priority list and it looked it as his second-string Arsenal team conceded four goals in the opening 37 minutes at the Madejski Stadium.

Reading, third from bottom in the Premier League, ran riot early on thanks to Jason Roberts, a Laurent Koscielny own goal, Mikele Leigertwood and Noel Hunt.

Theo Walcott gave twice former League Cup winners Arsenal hope with a goal before halftime and impressive substitute Olivier Giroud made it 4-2 on 64 minutes with a classy header.

The Londoners were a different side in the second half with France striker Giroud making a big impact.

Defender Koscielny made up for his earlier error with another headed goal in the 89th minute before the Arsenal fans went wild with delight when Carl Jenkinson was credited with the equalizer after he smashed the ball in after Walcott had appeared to score.

The visitors thought their comeback was complete in extra-time when the much-maligned Marouane Chamakh, making his first start since January, drilled the ball home to make it 5-4.

Pavel Pogrebnyak hauled Reading level with a header from six meters and then, just as the goalkeepers were preparing for a penalty shootout, Andrei Arshavin’s shot was cleared off the line and feel kindly for Walcott to grab his second goal.

Chamakh added Arsenal’s seventh just before the whistle with a smart lob over keeper Adam Federici.

ARSENAL SPIRIT
“You cannot play for Arsenal and give up, no matter what the score is,” Wenger told Sky Sports television.

“The players understood at halftime that they couldn’t come out in the second half with the same performance. Give them credit, they responded very well.”

“We will just have to take this on the chin though as a group and get on with our jobs.”

Shaun Maloney and Jordi Gomez were the Wigan players who failed to convert in the shootout.

Aston Villa needed a last-gasp goal by Christian Benteke to ease past third tier Swindon Town 3-2 after having thrown away a 2-0 lead in the last 12 minutes.

Benteke had opened the scoring before Gabriel Agbonlahor doubled the lead for the visitors.

Swindon substitute Miles Storey struck twice in three minutes to pull his side level only to see Benteke hammer in a cross with just seconds remaining.