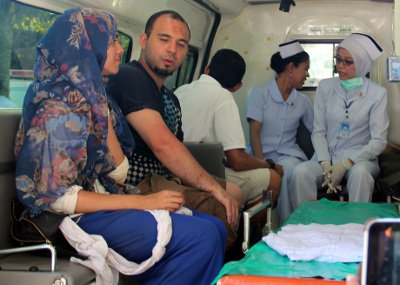 PHUKET: Local officials are looking into how to make trekking in Phuket national parks and wildlife reserves safer, following two British tourists losing their way and having to spend the night in the wild at Khao Phra Thaew Wildlife & Forest Reserve.

Mohammed Samir El Shimi, 28, and Hanna Zareen, 26, were discovered early this afternoon by a local villager named only as “Ms Suphatra”. The couple, alive and well, had lost their way while trying to return to the park entrance after dark yesterday evening.

In response, Phuket Vice Governor Chamroen Tipayapongtada today said that he will discuss with the park chief what safety measures are to be introduced in order to prevent any similar incidents from happening again.

“The center should give their suggestions, and perhaps post signs to inform tourists how far they can go up the trail and what time they should start coming back down,” he added.

V/Gov Chamroen also suggested installing checkpoints at critical stages along the main paths to keep count of how many tourists have ventured up the trail so that officials will know if any are missing.

“That way we can be sure that every single tourist has come back down,” he said.