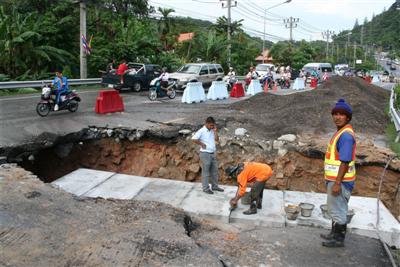 PHUKET: After almost daily flooding, work is now underway on a ‘permanent solution’ to the chronic drainage problem on the low-lying stretch of Patong Hill road where sinkholes have formed in the past.

The Phuket Provincial Highway Department and Patong Municipality are joining forces and funds to complete the 5-million-baht project which will replace the existing 80-centimeter tubular concrete drainpipes with larger pipes constructed from 1.5-meter square sections.

The project got underway on Wednesday and workers hope to complete the work in about one week.

In the meantime, motorist are advised to exercise extreme caution when passing the worksite, located near the entrance to The Crest villa project.

When construction is completed and the road resurfaced, chronic flooding in the area should abate, he added.

Phuket Highway Department Director Arun Sa-nae said the project should spell the end to the problem as the new, larger pipes will be able to channel all of the runoff under the road.

Over the past month, excess floodwater running over the road to depths of almost half a meter during heavy rainfall have created dangerous conditions for motorists, especially those on motorcycles.

The problem area is the site of a natural drainage gully that can no longer cope with all of the runoff because of the hillside construction there.