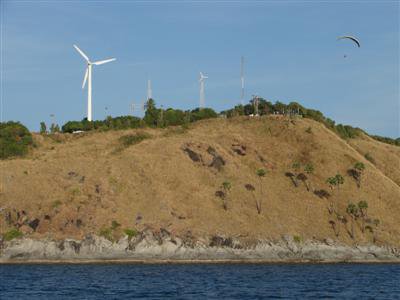 PHUKET: The Energy Ministry is moving forward with plans to build more wind turbines in Phuket.

“We have collected wind energy data at the Phromthep Alternative Energy Station windmill since 1983. The turbine there currently generates about 150 kilowatts per hour,” he said.

If approved by the ministry, the Electricity Generating Authority of Thailand (EGAT) would build much bigger windmills at the sports field on Khao Daeng, near Laem Phromthep. Each windmill would generate a maximum of 1,200 kilowatts per hour.

Investment in the wind farm, if approved, could be as high as 180 million baht.

Phuket Energy Office chief Jirasak Tummawetch said the project is suitable for the ‘Phuket Green Energy Project’ as wind is a clean source of power production that does not contribute to global warming.

“The wind farm could also be a new tourist attraction for Phuket,” he suggested.

The Phuket Energy Office is still waiting for EGAT officers to install anemometers high up in the Nakkerd Hills, near the Mingmongkol ‘Big Buddha’ image, to see if that area might also be suitable as a wind farm site.

“It will take at least a year after the measuring instruments are installed to get the necessary data about wind speed and direction,” he said.

When the project was first reported in September last year, the Energy Office said they expected the meters to arrive in late 2009.