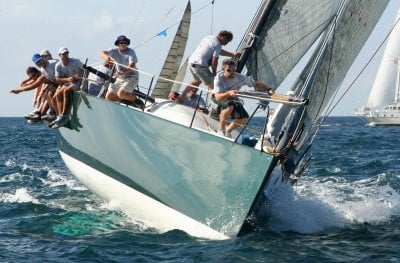 KATA: After three days of light winds and difficult conditions, the wind finally arrived off Kata Beach today, breathing new life into crews aboard the record fleet of 102 boats and giving them cause to enjoy the best racing so far in this year’s King’s Cup Regatta.

Three-time King’s Cup winner Neil Pryde is on target to win another King’s Cup to add to his already crowded trophy cabinet at his home in Hong Kong. Pryde now has the overall lead in the Racing 1 class on his boat Hi Fi despite a fifth place and a second place in today’s two races.

Paul Winkelmann’s Island Fling is giving Pryde a run for his money and is second overall in the class after winning the first of the two races today. However, a sixth place in the second race of the day allowed Pryde to slip into first place overall.

Despite scoring two first places, Frank Pong is in fourth place overall on his 75-foot yacht Jelik and is still within striking distance of upsetting Pryde’s plans for a victory. “We had a good breeze today which shifted a bit, but we moved very well,” said Pong, who is helping China’s team prepare for the America’s Cup.

Australian boat Strewth, skippered by Geoff Hill, has the overall lead in the Coutts Premier class after a second place in the one race contested in the class today.

Hong Kong-registered boat Moon Blue II, skippered by Peter Churchhouse, won the hotly contested Premier class race by less than a minute from Strewth. Both boats are on eight points at the top of the overall standings for the class, though Moon Blue II has a two-point advantage after factoring in the “drop”.

Bringing up third place in the class is Moon Blue, skippered by Hong Kong’s Andrew Richards. However, Moon Blue is a distant third and almost out of contention for the top two places.

There has been a lot of interest in the new Firefly catamarans, which are designed and built in Phuket. Five of the quick cats, dubbed “Formula One” machines of the sea, are racing in their own class for the first time. Hong Kong publisher Marc Cudennic’s Chi Machine has won four of the six races contested so far, giving it a six-point lead on Moto Inzi with only one race to go.

Moto Inzi, skippered by Pattaya-based Brit Roger Kingdon, has 12 points, while King’s Cup veteran Henry Kaye is in third place on his boat Mamba, with 14 points.

Principal Race Officer Howard Elliot was a happy man after today’s racing, and has his fingers crossed that the wind will be just as good tomorrow – the final day of the King’s Cup.

“We had good wind of around 10 to 12 knots at the start today, and it was steady all day,” said Elliot. “We have our fingers crossed that we’ll have the same conditions or better tomorrow.”