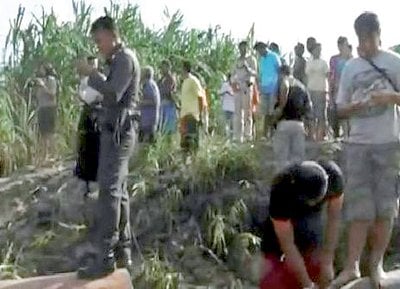 PHUKET: Egyptian couple Hossam and Sarah boarded a plane on June 2 bound for their dream honeymoon in Phuket. However, their love story, which began in their mid-teens, came to an unfathomable and abrupt end in Phang Nga, when their tour company decided to brave rough waters and lead a whitewater rafting trip that ended in disaster.

It wasn’t until three days after the trip that the body of the honeymoon groom, Hossam Mostafa, 24, named by the Egyptian Embassy in Bangkok as Hossamellein Mostafa Abdallas Hamada, was found last Monday.

Mr Mostafa’s family agreed to talk to the Phuket Gazette in hopes that their tragic story might not be repeated by others.

Hossam and Sarah Mohamed Hussien were a “big love story”, said Mr Nabil. The young couple had been together since secondary school, meeting when they were about 15 or 16 years old.

After graduating from secondary school, Hossam joined the police academy where he specialized in weapons training.

It wasn’t until June 1, after years of being together, that the two formally tied the knot. They left their wedding party in the back of a refurbished convertible while pyrotechnics rocketed off in the background.

The couple arrived in Phuket on June 3.

Hossam and Sarah booked an adventure tour with Rafting Discovery Ltd, which is based in Chalong. The river, Klong Song Phraek, had been closed to rafters for the past four days, but was re-opened to rafting trips on June 8. Despite this, Rafting Discovery Ltd was the only operator running the trips on the river on June 8 – the day of the tragedy.

Sarah was reportedly hesitant about going, but eventually she and Hossam were talked into joining the whitewater rafting portion of the trip.

“The two guides told Hossam that it was safe and allowed. The last four days it had not been allowed, but now it was safe,” Mr Nabil said.

Sarah and Hossam were joined by two men from Kuwait, one of whom was also killed during the trip. Aref Atamosammad Mosammad, 48, died at the scene.

Rafting Discovery Ltd was unwilling to give any specifics as to why the raft capsized, or what happened after the incident.

“The accident this time was caused by the strong water in the river in the rainy season,” was the only explanation the company would offer.

After the raft flipped, Hossam and Sarah clung to each other.

“They were hanging onto each others hands, before the water ripped Hossam further downstream,” Mr Nabil explained.

“In his last minute, he was hanging onto his wife,” he added.

Family members are in disbelief at the treatment Sarah received from the tour agency and the local hospital.

“In this case, the physiological pain was much more powerful than the physical pain,” Mr Nabil explained.

“They released her from the hospital wearing only a hospital gown, just one or two hours after she had arrived.

“She wasn’t given any medical care. She didn’t even have shoes on her feet. She spent four hours on the bus in this condition,” he said.

To this, Phang Nga Hospital Deputy Director Dr Thipparat Tansakulprasert told the Gazette that the hospital does not have an in-house psychiatrist.

“The two injured who were sent here requested not to receive any treatment from our hospital. Besides, they asked us to transfer them to a nearby private hospital,” he said.

During the ride on the tour company bus from Phang Nga to her room in Phuket, Sarah was told nothing about whether Hossam was still alive or what search efforts were underway.

After repeated invitations from the Gazette to Rafting Discovery Ltd to provide an explanation of the sequence of events, the only statement the company would
issue was:

“Our company always cares about the safety of the customers. We confirmed that all of our equipment is up to operation standards and is always in a good condition…

“We regret this happened, and we send our deepest apologies to both families.”

Even before Hossam’s body was found, two family members were on a flight to Bangkok.

Hossam’s body was found on Monday, still wearing the life-jacket he had put on for the trip.

His body was ceremonially prepared in Phuket before it was flown to Bangkok and then on to Egypt, accompanied by family.

Hossam was buried on Wednesday, June 13.

Hossam’s family, appalled with the local government and the tour agency, is considering legal action.