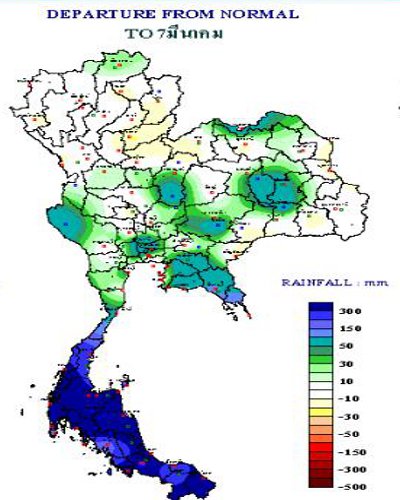 PHUKET: Unseasonably heavy rains along the Andaman coast are the result of the La Niña effect, a forecaster at the Southern Meteorological Center at Phuket Airport has confirmed.

The forecaster, asking that his name not be used, told the Phuket Gazette that this was the second year running that La Niña had brought heavy rainfall during what are typically Phuket’s three driest months: January, February and March.

Year-to-date rainfall amounts recorded at Phuket Airport and many other Thai Meteorological Department monitoring stations across the south are already 200mm to 300mm above the 30-year average for the period, he said.

The 30-year average at the station for the entire January through March period is just 142.5mm, according to Meteorological Department statistics.

As of today, the monitoring station at Phuket Airport has already recorded 405mm of rain.

Along the Andaman coast, the weather-monitoring station in Krabi has recorded the most rainfall so far this year, 596.4mm, followed by Satun (461.2mm) and Takuapa in Phang Nga (440mm).

The weather station in Nakhon Sri Thammarat has recorded the most year-to-date rainfall of any monitoring station in Thailand: 1,108.1mm.

Here in Phuket there is no let-up in sight. The forecast for the 24-hour period starting at noon today predicts scattered thundershowers covering 60% of the province and isolated heavy rain.

Immigration tops list of “most worn-out complaint’ in Phuket poll