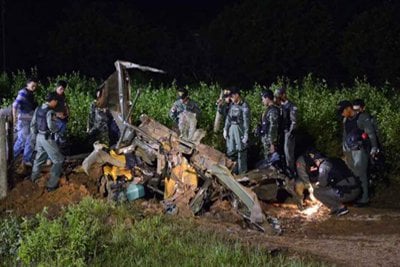 PHUKET (The Nation): The unit was returning home after providing security to Buddhist devotees and monks at a temple in the evening of Maka Puja Day when the explosion occurred at 10:40pm yesterday.

The explosion occurred on a road along the railway in Yaba village in Rusoh district.

Police said insurgents detonated the homemade bomb with a wired control. Police said a wire, which was over 100 metres long, was found at the scene.

The blast reduced to pieces the vehicle the five troops were riding in, with the remnants scattered over a radius of 4 metres. The blast also caused a one-meter-deep and three-metre-wide hole in the road.

Police said the unit was returning to their base in two vehicles after they were deployed to keep security at the Rat Samosorn Temple where Buddhists came out to celebrate Maka Puja Day.

PHUKET (The Nation): A transparent and speedy probe into three high-profile criminal cases involving the military in the deep South is crucial to restoring relations with the Muslim locals and minimizing the chances of insurgents exploiting them for propaganda against authorities, a Pattani seminar on counter-insurgency was told yesterday.

The most egregious case is the reported rape of a 16-year-old Muslim girl by soldiers attached to an unspecified unit.

A video of the act, filmed by a soldier with a camphone, was distributed throughout Yarang district, said Asis Benhawan, a senior adviser to the Southern Border Provinces Administrative Centre (SBPAC).

Due to the sensitivity of the incident, neither news reports nor Asis Benhawan have given a clear picture of what transpired, whether it was a consensual act or against the girl’s will, or was simply a case of statutory rape because of her age.

Asis said that besides disbanding an entire outpost that was the base of the soldiers’ unit, mediation was necessary and must be done quickly to compensate her and find her a new school.

The other two cases are progressing through the normal process. One was the recent beating of suspected insurgents while in custody by soldiers in Narathiwat, and the other was the fatal shooting of four villagers allegedly by a group of paramilitary rangers in Pattani’s Nong Chik district last month.

The SBPAC is taking part in probing the shooting case, relying on extra intelligence resources, he said.

The military needs to continue cementing relations with the local populace to win them over while being strict with discipline and preempting actions to prevent such incidents from reoccurring, he said.

Asis was speaking as the chairman of an advisory board comprising 25 members from nine councils representing locals in the three southernmost provinces.

In Narathiwat, a Buddhist temple has only three resident monks because few local Buddhists want to ordain.

They fear for their lives, as monks on morning alms rounds have been frequently attacked by militants with knives.

At Urai Rattanaram Temple in Bacho district, the rite to mark Visakha Bucha Day by circling the main temple three times, was held at noon instead of late evening for safety reasons.

The event, presided over by the three monks, was joined by troops on security detail and 50 Buddhist civilians.