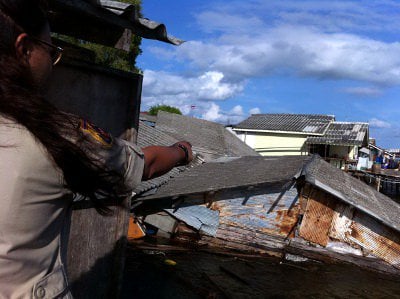 PHUKET: Five families are seeking refuge at a local public health clinic after a water spout demolished their homes in Krabi on Wednesday.

The water spout struck the small waterfront community of Khlong Kanan in Nua Khlong District, which comprises about 100 stilted homes raised about 15 to 20 meters above the water.

Jira Butraha, 30, said her seven-year-old daughter saved her from being caught inside her home as it collapsed.

“I was cooking in the kitchen when I suddenly heard a sound like a very heavy storm outside. Then my daughter came running in, yelling at me to get out of the house,” Mrs Jira said.

“So I ran outside and stood in front of my home. Less than a second later, the whole house collapsed into the sea. Luckily, no one was injured,” she added.

Talengsak Puwayannapong from the Krabi Office of the Department of Disaster Prevention and Mitigation (DDPM-Krabi) on Wednesday led a team of officers to inspect the site and render assistance.

“Local villagers said a ‘tornado’ rose up from the sea. It blew toward the houses, causing a lot of damage. Our initial estimates put the damage at a minimum of 1.5 million baht,” Mr Talengsak said.

The DDPM-Krabi will provide 30,000 baht cash and a household “survival kit”, including rice, cooking oil and bedding, to each family.

The families are now staying at a government housing complex located beside the clinic, where they will be allowed to stay until their homes are rebuilt.

The OrBorTor will also set up a donation center to raise funds for the five families.