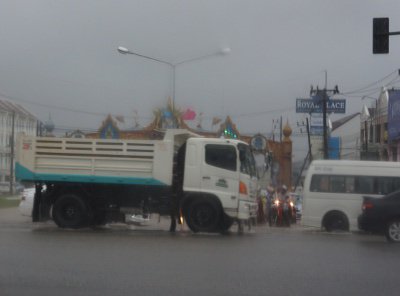 PHUKET: Expect longer-than-usual tailbacks around the Tesco Lotus intersection starting tomorrow, when the Phuket Highway Office will break ground on a drainage improvement project to address chronic flooding that occurs in the area.

The construction at one of Phuket’s busiest intersections will force the closure of some lanes between June 30 and July 4.

“With these new storm drains the water will drain quickly,” Mr Samak noted.

“Traffic in the area will be bad for a while, so we have to apologize in advance for any inconvenience,” he added.