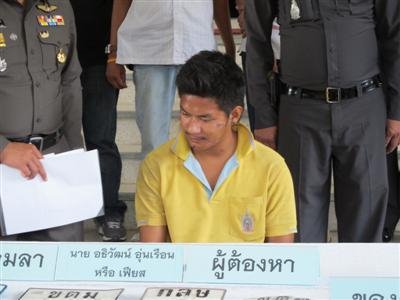 PHUKET: Phuket Police have arrested a member of a motorbike theft ring in Kamala, seizing 15 stolen bikes and other evidence valued at 900,000 baht.

Local residents who have had motorbikes stolen in recent months are encouraged to visit Kamala Police Station to see if theirs is among those recovered.

Kamala Police Superintendent Natthapakin Kwanchaipruk and his team led the investigation after more than 20 motorbikes were reported stolen in Kamala over the past two months.

All of the recovered motorbikes, many of which had been stripped for parts, were presented along with stolen license plates.

Mr Athiwat confessed to being a member of a three-member gang, identifying his accomplices as “Dul” and “Kee”.

Investigators learned that the three were using two homes in Kamala to store the stolen bikes. The Phuket Provincial Court issued search warrants for both premises, leading to the arrest of Mr Athiwat and the seizure of the vehicles on Wednesday.

Fifteen motorbikes and 13 license plates were among the 36 items of evidence presented.

Mr Athiwat and his accomplices tended to prey on less vigilant bike owners – people who did not lock them properly or left the key in the ignition. They also sought out bikes left in remote areas. Once stolen, many of the bikes were stripped of parts, which were then sold off to raise money to buy drugs, police said.

Investigators are now working to return the stolen bikes – or what is left of them – to their rightful owners. They are also trying to track down “Dul” and “Kee”, whose full names are not yet known.

“I would like to warn motorcyclists to use the security locking system [that prevents the wheels from spinning after the ignition key is removed] every time you park. Also, try to park your motorcycle in well-lit areas,” said Col Natthapakin.

Wreckage found on glacier is missing plane from 1952