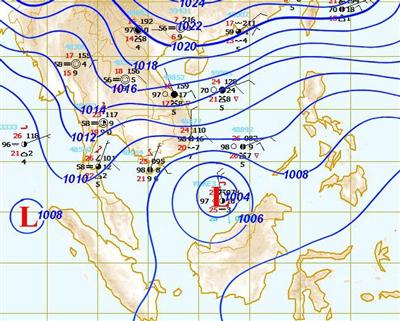 PHUKET: Tropical storm “Washi”, which killed nearly 1,000 people in the Philippines, will have virtually no effect on the weather here in Phuket, the Phuket Gazette has been told.

A forecaster at the Southern Meteorological Center (West Coast) at Phuket International Airport told the Gazette this morning that a high-pressure ridge would keep the storm track well south of Phuket.

Typhoon Washi, named after the Japanese word for “Eagle”, left at least 957 people dead as it passed over the Southern Philippines on Friday. The storm has since diminished in fury and has twice been downgraded.

At 4am today it was over the South China Sea, designated as a low pressure cell with its center expected to move over the Malaysian peninsular tomorrow.

According to the TMD forecast: “This causes more rainfall with isolated heavy fall in Nakhon Sri Thammarat, Phatthalung, Songkhla, Pattani, Yala, Narathiwat, Trang and Satun on December 21 and 22.

“Wind-waves 2 to 4 meters high are likely in the lower Gulf. All ships should proceed with caution and small boats keep ashore,” said the report.

The storm will have no effect at all on the weather in Phuket, a source at the center told the Gazette.

The center’s 24-hour forecast for Phuket for the period starting at 7am today is:

Cool in the morning, with isolated thundershowers over 10% of the province, mainly in the evening and night, and northeasterly winds 15kmh to 35kmh. Wave heights will be about one meter along the coast, up to two meters offshore, over the period.