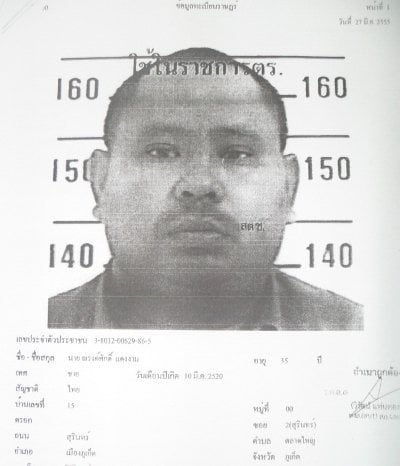 PHUKET: Phuket Provincial Court has issued an arrest warrant for the prime suspect in the shooting and wounding of Phuket Prison guard Danunun Teepapan on Wednesday night in Chalong.

Chalong Police Deputy Superintendent Narong Laksanawimon told the media that all of the evidence collected at the scene, as well as the information provided by the victim, indicated the assailant to be 35-year-old Narongsak “Man” Dang-ngam, now wanted on charges of attempted murder and illegal possession of firearms.

Police are also investigating the identity of a Burmese man who allegedly assisted Mr Narong.

Subsequent questioning of the victim confirmed a business dispute as the motive for the attack, Lt Col Narong said.

“We collected all of the evidence we found at the scene where Mr Danunun had parked his pickup truck. Later, we found an abandoned black four-door Isuzu pickup truck believed to have been used in the attack,” Lt Col Narong explained.

The truck was discovered in Tak Daed village, and was then towed to Chalong Police Station to serve as additional evidence in the case.

“I believe we will find him soon,” he added.

Wreckage found on glacier is missing plane from 1952