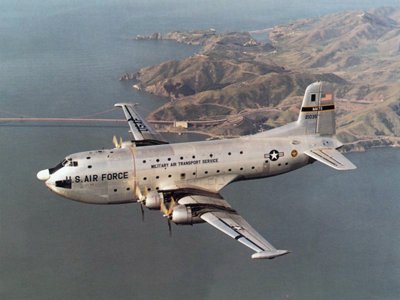 PHUKET: The aircraft wreckage which was found on a glacier near Anchorage earlier this month is believed to be a plane which went missing in the 1950s with more than 50 people on board, military officials said on Wednesday. Possible human remains have been recovered.

Captain Jamie Dobson, a spokeswoman for the U.S. Joint Prisoners Of War/Missing In Action Accounting Command (JPAC) at the U.S. Department of Defense, said some evidence at the wreckage site is directly linked to a C-124 Globemaster aircraft which disappeared in the region in November 1952.

“Some of the evidence at the wreckage site has been positively correlated to the United States Air Force G-124 Globemaster that crashed in 1952,” Dobson said. “We are still not eliminating other possibilities, but we do know at this point that some of the evidence that we are looking at is directly connected to that flight.”

The cargo plane, which was the largest in use by the U.S. Air Force in 1952, went missing on a flight from McChord Air Force Base in Tacoma, Washington, to Elmendorf Air Force Base near Anchorage. Last contact with the plane came as it flew through dense fog over Middleton Island in the Gulf of Alaska, about 160 miles (257 kilometers) southeast of Anchorage.

The aircraft was carrying 41 passengers and 11 crew members, including pilot Captain Kenneth J. Duval, 37, of Vallejo, California, and co-pilot Captain Alger M. Cheney, 32, of Lubeck, Maine. The plane’s wreckage was found days later on Mount Gannett with no signs of survivors, but weather made a recovery operation impossible. The aircraft was abandoned and later searches failed to locate the wreckage again.

Now, nearly 60 years later, this wreckage was discovered on June 10 by the crew of an Alaskan Army National Guard helicopter when, on a routine training mission, it was flying low over an area near Knik, a glacier on the northern end of the Chugach Mountains and about 40 miles (64 kilometers) northeast of Anchorage.

After an additional search-and-rescue mission by Joint Task Force-Alaska and the Alaska National Guard, military officials determined the aircraft was an old military plane. But officials were unable to identify the plane, resulting in the deployment of a specialized investigative team from JPAC.

Dobson said the team collected evidence at the site, including life-support equipment, personal effects, and possible osseous remains. “We’ve recovered as much evidence from the site as we were able to and needed to go forward with an identification,” she said. “There is a possibility that further evidence could surface.”

Officials have described the wreckage site as long and linear. “It was thousands of feet. Possibly 2,000 feet (609 meters) long and a couple of hundred feet (meters) wide,” Dobson said.

Over the last decades, dozens of military planes have gone missing in the area of Knik Glacier. “The whole area’s history is riddled with searches for planes that never came home,” Alaska aviation historian Ted Spencer told the Anchorage Daily News earlier this month. “Planes of all types, and they started disappearing when Alaska became an aviation-oriented place. It’s so vast.”