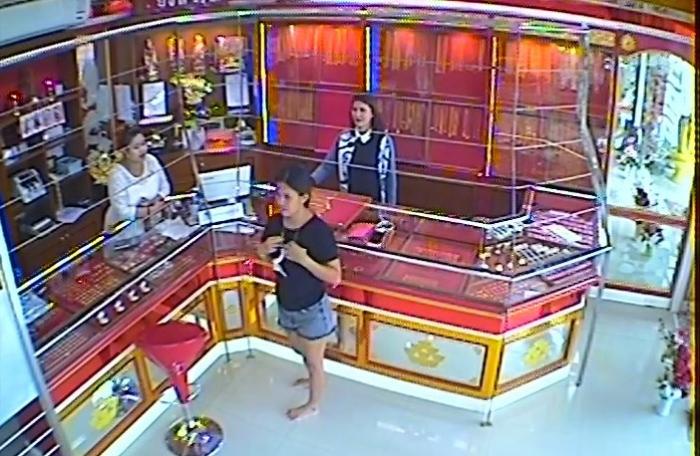 PHUKET: Police are hunting for a suspect who stole gold from at least two jewelry stores in Wichit and Phuket Town last week.

The woman’s face was captured by CCTV cameras at both stores. She is believed to be about 30 years old and 150cm tall.

The footage was shared on various social media forums, including LINE groups, warning other store owners to be careful.

The latest incident took place on Saturday morning, when she entered a gold shop named ‘Yong Dee’ in Wichit.

CCTV footage showed her browsing around the shop, looking at various items of jewelry. As soon as the store attendant turned away, she swiped a 15g gold necklace and put it in her pocket before leaving the store.

The store attendant only learnt about the missing necklace that evening, when she was counting inventory before closing the shop for the night.

She then filed an official complaint and submitted the CCTV footage as evidence to Wichit Police Station.

The owner of another store, ‘Ying Jaroen’, in Talad Nue also filed a complaint against her at Phuket City Police Station on Friday. This time too, the suspect’s face was captured on CCTV.

“We will check CCTV footage from nearby public areas to find out where she went. We already know her face and vehicle licence plate number, so we are sure we’ll find her soon. We have also provided her description and information to officers at Tah Chat Chai checkpoint, so they can arrest her in case she tries to leave Phuket,” said Col Sermpan.

“If anyone sees her, please call 191 to inform us immediately,” he added.