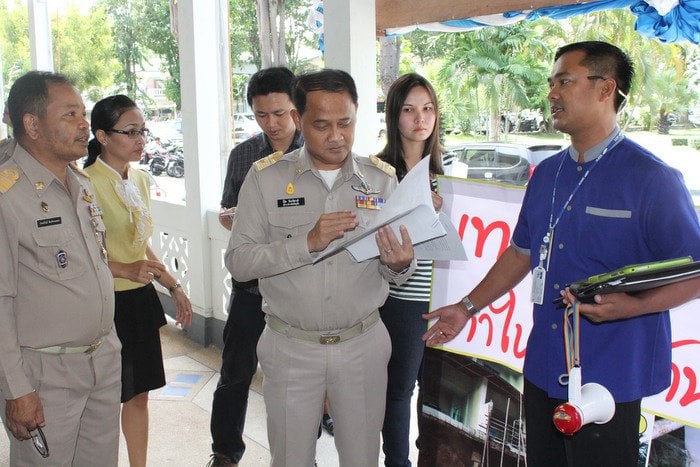 PHUKET: A group of villagers filed a complaint with the governor this morning over officials failing to compensate them after parts of their homes were destroyed during a Rassada Municipality drainage ditch construction project in 2013.

The case has been in process for two years, culminating in a agreement on May 12 this year that Rassada Municipality would compensate the Thanapa Park View 2 locals for the damages within 60 days.

“In 2013, the municipality hired a private company to construct the ditch at Soi Bang Chee Lao. The company dug up land much too close to the walls of seven houses, causing the walls to collapse,” said Treeyamat Srinuon, 40, an owner of one of the affected homes.

The villagers immediately informed Rassada Municipality about the damages.

“The municipality officials told us to find an engineer, estimate the cost and submit a plan for them. We have done that already,” said Mr Treeyamat.

“On May 12, during negotiations, Rassada Municipality Chief Administrative Officer [palad] Dechakanee Leelanont said that the compensation would by paid within 60 days.”

However, the payments never came, prompting the villagers to file the complaint.

Phuket Governor Nisit Jansomwong accepted the complaint from the villagers and arranged a committee, to be led by Vice Governor Somkiet Sangkaosuttirak and joined by Muang District Officers, officers from the Phuket Land Office, as well as other government bodies, to meet and discuss the case.

“The committee will meet tomorrow to begin the investigation,” said Governor Nisit.

Rassada Mayor Phudit Raksarat told the Phuket Gazette that he was aware of the case and knew that the villagers had not yet been compensated for the damages, but declined to comment further until after the committee meets tomorrow.