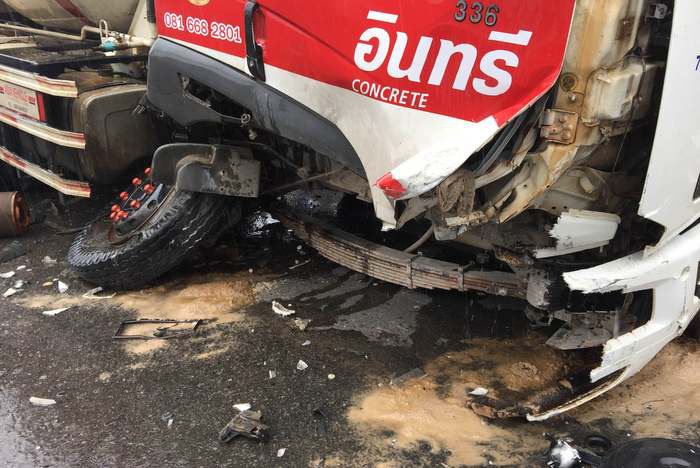 PHUKET: Two people were seriously injured when a pick-up truck collided head-on with a cement truck on wet roads in front of Supercheap in Bang Tao this afternoon.

“The pick-up truck driver and passenger, who were both seriously injured, had already been rushed to Thalang Hospital by the time police arrived,” Lt Peerasit Nhupayan of the Cherng Talay Police told the Phuket Gazette this afternoon, adding that police had not yet been able to name them.

The two have since been moved to Vachira Phuket Hospital, as they sustained serious chest injuries and had to undergo surgery, confirmed Lt Peerasit.

At the scene, police found a smashed Mitsubishi pick-up truck in the middle of the road, not far from a seriously damaged cement truck.

“We questioned the cement truck driver, Niphat Phumipratet, 31, who told us that he was heading to Surin Beach when the pick-up truck lost control and crashed head-on into his truck,” said Lt Peerasit.

“However, we have not concluded our investigation into exactly how the accident happened, as we have not yet been able to question the other two people involved.”

Meanwhile, Santhawat Riwleung, chief of the Department of Disaster Prevention and Mitigation (DDPM) Phuket office, has urged all drivers to do the obvious when it rains.

“Even though we have not issued an official warning letter to authorities, all drivers should be careful when driving, as the road is very slippery when wet,” he said.

“Also, take extra care when driving near construction sites, as dirt on the road is an added hazard for motorists. Please drive safely and do not forget to wear your helmet or seat belt.”