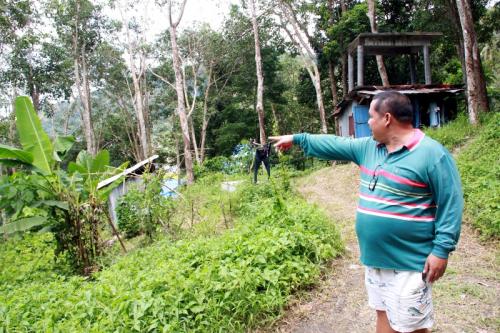 PHUKET: With a history going back over 200 years, Baan Mon is the “original” Patong community. However the community members, numbering more than 1,000, are now in the front line as they scramble to protect their homes from the construction of the Patong tunnel – Phuket’s first road tunnel project.

Baan Mon villagers claim that 90 per cent of residents are strongly against the tunnel project, as they say it will mean the eviction of nearly 500 people.

“We have tried everything to prevent Patong Municipality’s tunnel project, including suggesting alternatives such using 50 Pi Road; being routed past Wat Luang Pu Supha in Chalong; or even creating an extension to the Patong Hill road,” Wichan Sawatdirak, a respected former Kamnan of Patong, explained to the Phuket Gazette.

“We are begging them not to build the Patong tunnel because it will devastate the whole Baan Mon community. Besides that, the King’s Plaque Monument will be concealed if the elevated tunnel approach road is constructed, but they didn’t listen to us and just continued with the project,” he said.

Standing alongside Mr Wichan at the time of the interview was Ban Mon resident Boonlert Winyantikul. Mr Boonlert owns 10 houses in the area and stands to lose not only his family home, but also rent paid by tenants who live in the other houses.

“We even suggested that the tunnel mouth be relocated to the area around Patong Go-Kart Speedway,” Mr Boonlert added.

Another local, Thachapol Kamintong, has a four-rai rubber plantation on the hill through which the tunnel will run.

“There are about 80 houses that will be affected by the project. That’s about 500 people who will have to move out. And, as yet, they haven’t told us how much they will give us for our houses and land,” he said.

“You can bet it won’t be the same price as the price for land in Patong. The lowest land price there is about 10 million baht per rai.

“Even if they give us the Patong price, we still wouldn’t leave because this is our ancestors’ land,” said Mr Thachapol.

Mid-November, the Gazette spoke with Ban Mon villagers about the Transport Minister’s meeting, held at the Metropole Hotel on October 5, which, among other topics, touched on the subject of the Patong tunnel project.

“We weren’t officially informed that the meeting was taking place at all,” Mr Boonlert said. “We only found out because a member of the hotel’s staff who knew me called and told us they were talking about the tunnel project. A few of us then rushed to the hotel to see the minister and explain.”

“The public hearings arranged last year failed because all the Ban Mon residents disagreed with the project, so Patong Municipality stopped holding public hearings. We actually stopped our campaign when they told us that the project had been cancelled. Then we heard about the meeting at the Metropole Hotel,” Mr Boonlert explained.

Prateep Aooppatanont, another villager who stands to lose his land if the project goes ahead, said, “It reminds us of a previous meeting at the Metropole Hotel last year. Many of those who attended that meeting had no involvement with the project whatsoever. They were from somewhere else and were just invited to show support for the tunnel project.”

Mr Boonlert noted that during the past couple of years villagers had drafted official letters protesting the project and delivered them to people at various levels of authority.

Mr Thachapol explained that until the meeting in early October he and the other villagers had thought the project had been cancelled.

“It seems that the project is back on, but is now being organized by the Expressway Authority of Thailand (EXAT),” Mr Thachapol said.

“What this means is that the whole process starts at the design stage again. The 40 million baht spent by Patong Municipality on plans, surveys and consultants is wasted. Now more public money will be spent – our money.

“But it doesn’t really matter, because when EXAT decides on their ‘new project’, we will be united in our opposition to the tunnel project.

“We are just waiting to see their next move, so we can plan our response accordingly,” Mr Thachapol added.

Mr Wichan agreed, adding that the project would fail in the face of a united village opposition.

Mr Boonlert pointed out that not only would the project destroy the green environment, but also the community’s way of life.

“We need to stay in our ancestral home. If our land is expropriated, what will we do next, and where will we go?” he asked.