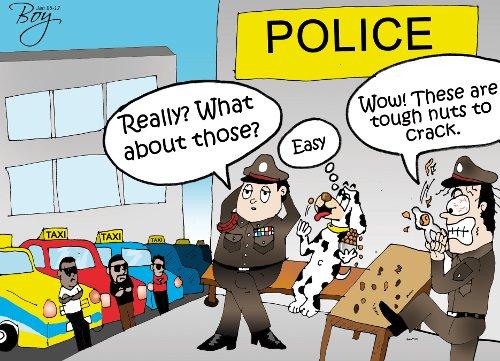 Unfortunately, the inability or unwillingness of traffic police to consistently seek out and punish violators virtually guarantees no change in the status quo. Thus, recent efforts by the Phuket Land Transportation Office (PLTO) to fine violators will likely turn out to be just the latest in a long series of come-and-go “crackdowns” that will have little long-term effect.

The past year saw one crackdown after another, with just about every vice or transgression imaginable up for the threat of “special suppression” at some point.

To get the ball rolling, every year starts with a “Seven Days of Danger” road safety campaign that is repeated a few months later during the Songkran holidays. While these campaigns may have a minor effect in lowering road accident death rates during the periods they are in effect, they are no substitute for what is really needed: strict, year-round enforcement of traffic laws, especially in regard to moving violations.

Other crackdowns on the annual calendar are as predictable as the cycles of the moon. In the run up to the annual Vegetarian Festival there is the inevitable crackdown on fireworks, price gouging on vegetables and unhygienic self-mutilation.

No major sporting event, such as last year’s Euro 2012 competition, would be complete without police threatening to throw the book at anyone caught gambling. Even the most romantic date on the calendar, Valentine’s Day, only arrives after stern warnings are issued by district offices to the island’s youth about the evils of unprotected sex.

In addition to these annual crackdowns are “event specific” suppression campaigns that follow highly-publicized disasters. A good example from 2012 is the crackdown on building code violators at the island’s nightspots following the Tiger Discotheque inferno in August that claimed four lives.

Of all the crackdowns and campaigns Phuket has witnessed in recent years, perhaps the most effective has been the “100% helmet use” drive that has seen the island become the province with the highest incidence of helmet use among motorbike riders and passengers in the Kingdom.

Inexplicably unfortunate, however, is the fact that posters around the island encouraging helmet use bear images of cheap, flimsy helmets rather than the sturdy, full-face variety.

Getting back to the latest crackdown threat, the Gazette fully agrees with the majority of readers that there should be little room for leniency in regard to those who illegally operate taxis on the island. The island’s image has already been harmed enough by legal taxi and tuk-tuk operators.

Thus we wish the PLTO the best of luck in getting police to join in the effort to rid the island’s roads of illegal taxis – they are likely going to need it.