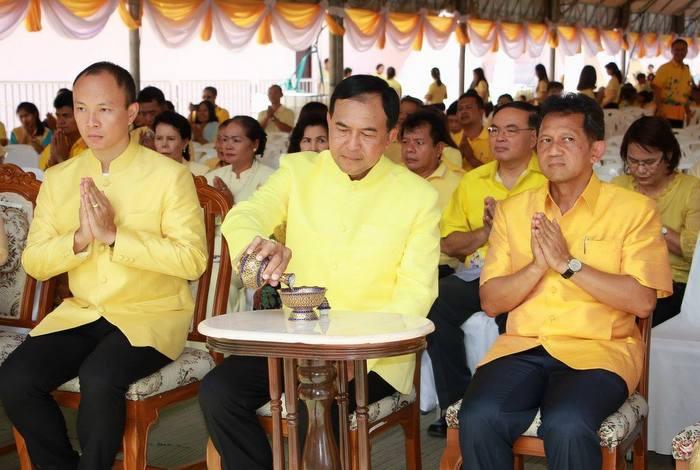 The beach’s reopening comes after the April demolitions of private structures, found to be illicitly operating on public land (story here).

The renovated beach was renamed as ‘Rajabhakti Park’, in honor of His Majesty. Region 4 Army Deputy Commander Kunnawut Morkaew headed the ceremonies, after being invited by provincial officials.

The ceremonies got underway at 7am, with provincial officials giving alms to Buddhist monks, and Christian, Muslim, Sikh and Hindu blessings for the beach and His Majesty the King conducted by the island’s religious leaders.

Phuket Governor Chamroen Tipayapongtada also used the beach opening to announce the launch of 12 ‘Love the Beach Community’ projects yesterday, which partner local communities with beaches in an attempt to keep them clean and safe.

“It is our great pleasure to honor His Majesty today, and the natural wonders of Surin Beach,” said Maj Gen Kunnawut. “Today, we can witness the great efforts of the Phuket officers who’ve worked on beach management.”

Officials have announced plans to make 60 million baht worth of improvements to the beach (story here), including a botanical garden dedicated to Her Majesty Queen Sirikit; an exhibit showing projects initiated by His Majesty the King in 76 provinces; a sailboat museum; a golf course; a pavilion; a photo center; and statues of the seven kings of Siam from the Sukothai period.