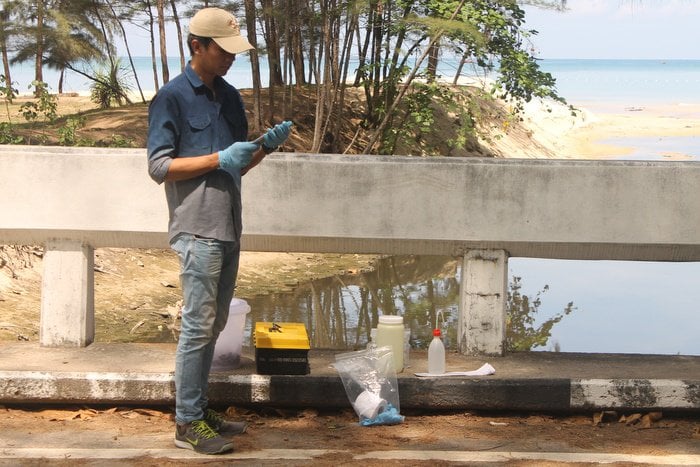 PHUKET: Tests conducted by environment officers have confirmed that the foul canal water that washed onto Nai Yang Beach this week is in fact not polluted wastewater, the Thalang District Chief told the Phuket Gazette today.

The tests, conducted yesterday, were prompted by villagers complaining of rank-smelling water emanating from a blocked canal that overflowed and seeped across Nai Yang Beach and into the sea (story here).

“The tests showed that the water is not polluted,” said Thalang District Chief Veera Kerdsirimongkol.

“The dark color and stench were caused by leaves and sediment that built up in the canal, rotted and ultimately prevented the water from flowing properly.”

Mr Veera has ordered the immediate use of Effective Microorganisms (EM) in the canal to mitigate the stench as an initial, short-term solution to the problem.

“For a long-term solution and to address the issue of individuals and businesses dumping untreated wastewater into the canal, which was raised by local villagers this week, the Thalang District Office and the Sakoo Tambon Administration Organization [OrBorTor] will track inspect and find out exactly who – if anyone – is committing this offence,” said Mr Veera.

The penalty for discharging untreated wastewater is a fine of up to 2,000 baht. However, Mr Veera explained that education would be the first step taken in putting an end to the malpractice.

“If we find anyone discharging wastewater into the canal, we will warn and educate them, rather than charge them right away,” he said.

“But, if they fail to manage their own wastewater and continue to release it into the canal, we will have to take legal action against them.”