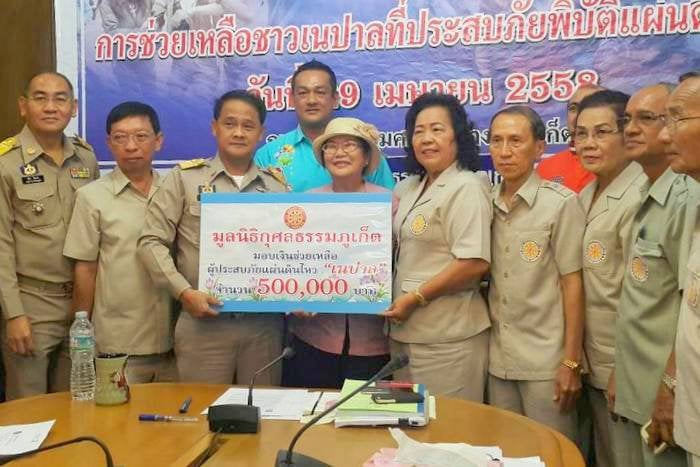 PHUKET: Donations for victims of the disastrous earthquake in Nepal continue to roll in, with more than 1 million baht already having been raised for the ‘Phuket Together For Nepal Disaster Victims’ fund.

As of this morning, the devastating quake had claimed more than 4,400 lives.

The fund’s donation total more than doubled after two donors handed over more than half a million baht at a press conference to officially launch Phuket’s fund-raising efforts this morning.

“On behalf of Phuket, I would like to call for more donations to help the Nepalese people. They are in dire need,” said Phuket Governor Nisit Jansomwong this morning.

“When Phuket was affected by the tsunami, a lot of people from all over the world came to our aid. It is now our turn to give.”

The first round of donations will be handed over to the Nepalese embassy on May 7, but donations can be made to the fund through May 30.

“The gifting of the first round of donations will be broadcast live on a Phuket local TV channel on May 7,” confirmed Governor Nisit.

Panuphong Limbuprasertkul, president of the Phuket branch of the Thai-Nepalese Foundation, officially called Shree Bhagawat Dhaam Sanatan Mandir Foundation, expressed his sorrow for those affected by the disaster.

“There are about 2,500 Nepalese people living in Phuket. We have friends and family members there. I would like to pass on my deepest condolences to everyone affected. We will do our best to relieve the pain,” he said.