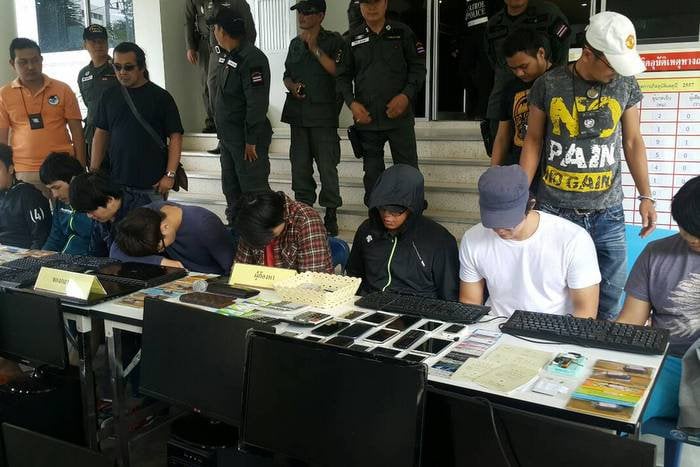 PHUKET: Police are searching for the head of an online gambling operation after eight Koreans were caught on Wednesday running a gambling site out of an apartment in Phuket.

The arrests follow a report in March from police in Bangkok about the gambling racket. Phuket Police have been on the trail ever since, said Phuket Provincial Police Commander Patchara Boonyasit.

“After months of collecting evidence and monitoring the suspects’ activities, we tracked them down to a rental room at Eva Town in Wichit, which they were using as an office,” said Maj Gen Patchara.

“In the apartment, we found more than 60 Korean bank books with more than 100 million baht in assets, 60,000 baht in cash, mobile phones, laptops, computers, flash drives, an iPad and other devices and items needed to run the operation,” said Gen Patchara.

The suspects told police that they were only employees, and that someone else had created the website – only in Korean – so people could place bets on international sporting events, said Gen Patchara.

“All gambling ring members put money into the ‘pot’, which is one main account for the website, via bank transfer. The website then stores their bank account information and either transfers money back to them if they win or keeps the money if they lose,” he said.

“All the website members are Korean. About 100,000 to 150,000 baht flows through the main account on a daily basis. The main boss controls the back account. We believe that the boss is somewhere in Thailand.”

The eight suspects told police that they earned 60,000 baht per month for operating the website.

“We believe they came to Thailand to set up the website because gambling laws in Korea carry harsher punishments than those here,” explained Gen Patchara.

All eight suspects confessed to their crimes, and were charged with operating an illegal online gambling website.

“The punishment for this crime is up to three years in prison, a fine of 60,000 baht or both,” Gen Patchara said.

The men are being held at Phuket City Police Station.

“We work very hard to keep crimes like this from happening in Phuket. As it is a tourist destination, we are more likely to see crimes of this nature here,” Gen Patchara added.