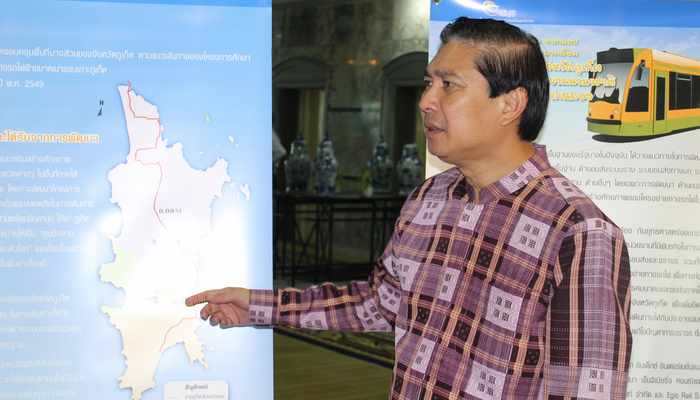 PHUKET: The effects Phuket’s long-awaited light-rail system will have on Phuket Old Town was a point of contention during the second public hearing for the project yesterday.

Of the 370 Phuket residents in attendance, many voiced their support for the project, while others expressed their concern on how the tracks, which are planned to dominate some roadways through the heart of Phuket Town, would affect the inner-city community.

“Phuket Old Town must be preserved, and this trolly should not affect people’s day-to-day lives,” local resident Palat Jantarasopin said.

However, Phuket City Mayor Somjai Suwansupana thought the project might help boost her efforts to bring tourists to the cultural center of the province.

“This will be a great way to promote the Old Town as a tourist destination and support small businesses in the area through increased tourist traffic,” Ms Somjai said.

Nonetheless, she asked that the light-rail connect Phuket City with many of the island’s famous beaches.

“This would allow for easier travel between the beaches and Phuket City,” she said.

Other residents asked for the train to connect to more rural destinations in order to allow locals to use it for commuting to work and for children to travel to school.

The other major effect Old Town residents face stems from the light-rail tracks being built on existing roads in Phuket Town. For other stretches of road, such as Thepkrasattri Road, the tracks will run along the median.

“The next public hearing will be held specifically for Phuket Old Town residents, as they will be affected by changes to traffic flow through town,” said Chula Sukmanop, director of Thailand’s Office of Transport Policy and Planning.

Motorists will have to yield to the train at every intersection. However, at some intersections, there will be underpasses for motorists to use, Mr Chula explained.

There will be 20 stations between Phuket International Airport and Chalong Circle, Mr Chula said.

“Although the trolley will have the ability to travel at 100kmh, the speed will be reduced to between 20 and 40kmh when it goes through Phuket Town,” Mr Chula added.

The first public hearing for was held at the Metropole Hotel on December 20 last year (click here).

The date for the final public hearing has yet to be set, though an additional concern asked to be addressed at the next meeting was creating the necessary parking areas at trolley stops.

The proposal heard in the meeting yesterday was prepared and presented to Phuket officials on May 28 (story here).

The day before, Governor Maitri introduced the six Thai companies hired by the Office of Transport and Traffic Policy and Planning to conduct a feasibility study that will cost 118 million baht.

The resurgence of the plans to build a light-rail in Phuket follows the project grinding to a halt in 2012 when Bureau of Regional Transport and Traffic Promotion pointed out to Phuket officials that by law it could not accept any feasibility studies by private companies that were not specifically commissioned by the government (story here).