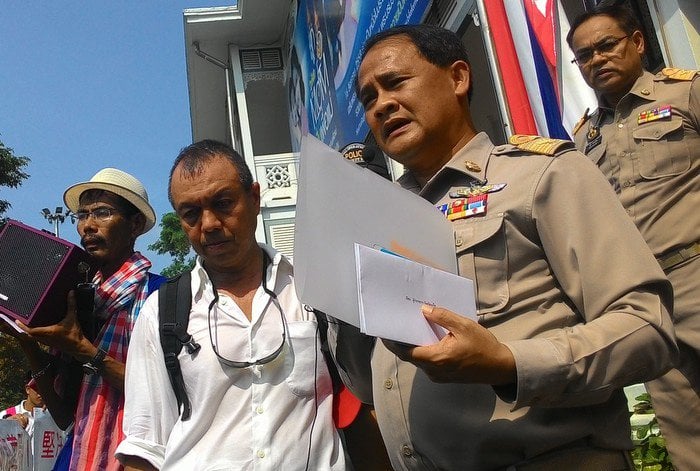 PHUKET: About one hundred tour guides descended upon Phuket Governor Nisit Jansomwong today, demanding that they be allowed to partake in the investigation into illegal tour guides and that the governor evaluate the performance of the current director of the Ministry of Tourism and Sports (MOTS) Phuket Office.

“We are following up on promises made last year about foreign tour companies signing a Memorandum of Understanding (MoU) to rid Phuket of a plague of illegal tour guides,” said Krich Thepbamrung, the director of the Andaman Professional Tour Guide Association.

After marching from Queen Sirikit Park to Provincial Hall today, the guides handed a letter of complaint to the governor.

“The illegal tour guide problem in Phuket has been ongoing for years, and yet it remains unsolved. Travel agencies claim that there are not enough legal tour guides with sufficient language abilities for certain markets. This is false. There are more than enough literate and competent tour guides,” the letter stated.

Despite Chinese tourist arrivals to Thailand sky rocketing, going from about 3 million in 2014 to more than 6mn from January to June this year, Mr Krich insisted that there were enough registered Chinese-speaking guides working on the island.

Tour guiding is one of the many protected professions in Thailand that can only be held by a Thai national. A standard workaround that is commonly used is having a a Thai tour guide on the trip, while a native to the nationality of the group leads the tour, explained Mr Krich.

“This system is not going to work. For example, a Korean national who is leading a tour might get 10,000 baht a day through commissions and other means, while his Thai assistant will only get 1,500 baht a day for the same tour. Do you think the Korean would switch salaries? Do you think this is fair to the registered Thai tour guide? I don’t think so,” Mr Krich said.

The Phuket Gazette was unable to substantiate Mr Krich’s claim that it was possible for a illegal foreign tour guide to make 10,000 baht a day.

“The tourism industry would not suffer if Phuket was free of illegal tour guides. In fact, having them as part of the system does not help Thailand’s economy at all. More so, they are breaking the law,” Mr Krich said.

The letter handed to the governor made a number of demands, which included the governor step in and ask relevant departments to put an end to illegal tour guides operating on the island and overseas nominee companies that allegedly hire them; registered guides be involved in the investigation of illegal tour guides; and the governor evaluate the work of Santi Pawai, the director of the MOTS Phuket Office.

Governor Nisit accepted the letter and ensured the group that he would take action before his time as Phuket Governor came to an end on September 30.

Philippines’ ‘most wanted’ arrested in Phuket