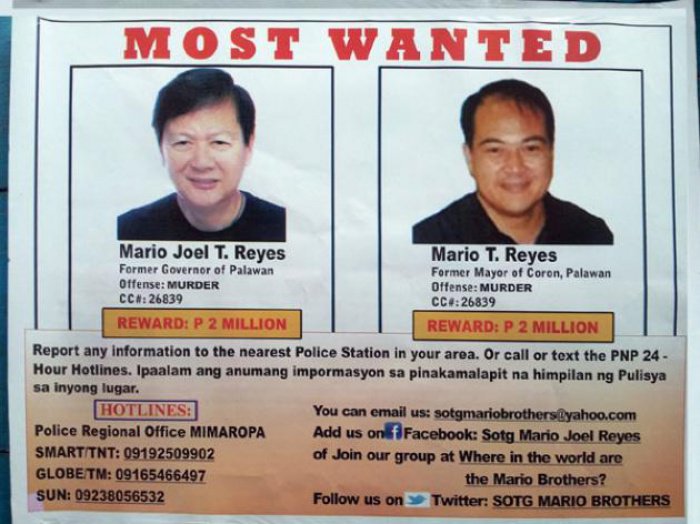 PHUKET: Former Palawan Governor Joel T Reyes and his brother Mario Reyes were arrested in Phuket on Sunday, according to a Philippine Daily Inquirer police source.

The source, an official of Task Force Usig, the tracker group assigned to catch big-name fugitives from the Philippines, said that the Reyes brothers had long been wanted for the slaying of Palawan environmentalist and journalist Gerry Ortega. The task force was in close coordination with the Thai police, who are holding the brothers before deportation, the source added.

Four of the five high-profile fugitives have been arrested. Only Mr Ecleo remains on the run.

The arrests were confirmed by the victim’s wife, Patty Ortega, who told the Inquirer that she had been officially informed by authorities.

Ortega’s daughter, Mica, said in a radio interview that the family was initially ‘stunned’ and could not believe the news.

Ms Mica added that they felt relief that justice could continue with the trial of the alleged masterminds.

Joel and his brother Mario, then the mayor of the town of Coron in Palawan, fled the country in March 2012, several months after they were indicted by the Department of Justice in the Ortega murder. An arrest warrant was issued for them by the Palawan Regional Trial Court.

Mr Ortega, a hard-hitting broadcaster and a well-known environmental crusader, was shot dead by a lone assassin in downtown Palawan on January 24, 2011. The assassin, Marlon Recamata, was arrested after a brief chase and later confessed to the crime.

Mr Recamata’s arrest led to the arrest of several other suspects who pointed to the Reyes brothers as the masterminds in the slaying.

The Reyes brothers have been seeking to quash their arrest warrant before the Supreme Court and had managed to win an appeal in the Court of Appeals on their motion that questioned the validity of the creation of a Department of Justice prosecutors’ panel that indicted them for murder.