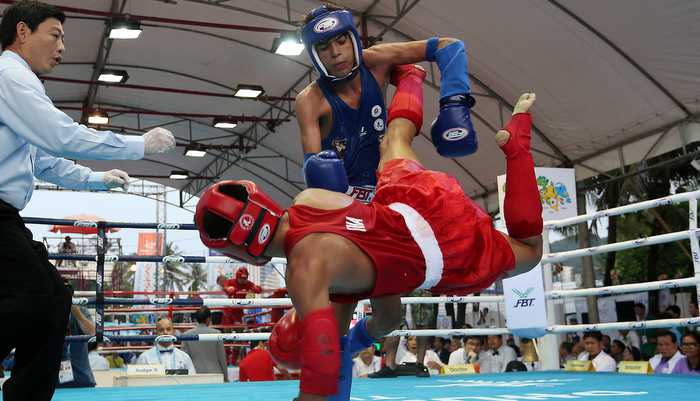 PHUKET: The head of the two leading sports associations representing the Thai national martial art Muay Thai submitted a formal request on Tuesday for the sport to be included in the next edition of the Asian Games, to be held in Indonesia in 2018.

The ultimate goal is to see the sport included in the Olympics, explained Dr Sakchye Tapsuwan, president of the International Federation of Muaythai Amateur (IFMA, click here) and Secretary-General of the World Muaythai Council (WMC, click here).

Haider AHE Farman, director of the Asian Games Department at the Olympic Council of Asia (OCA), received the formal request on Tuesday at an event held at the Phuket Graceland Resort & Spa in Patong.

“Today, we are here to bring a big step to the Thai sport that we are proud of and think of as the heritage and legacy of the Thai people,” said Dr Sakchye.

“The WMC, founded in 1995 under royal patronage of HM King Bhumibol Adulyadej, has played a pivotal role in the promotion of Muay Thai worldwide. With more than 128 countries around the world now members of the council, our sport is now internationally recognized.” 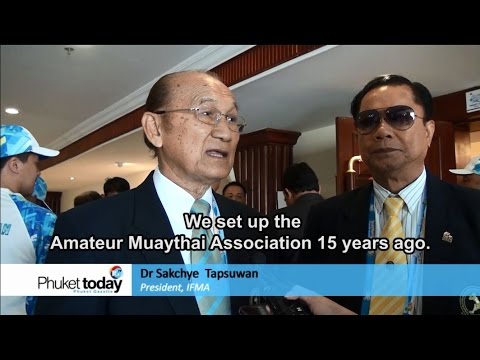 Phuket Today talks with Dr Sakchye Tapsuwan and Stephan Fox of IFMA about the push for Muay Thai’s inclusion in the Asian Games. Video: PGTV

The inclusion of Muay Thai in the 1998 Asian Games as a demonstration sport received good feedback, with 14 countries participating, Dr Sakchye noted, adding that Muay Thai is included in many international sporting competitions, such as the Asian Martial Arts Games and now the Asian Beach Games.

“The possibility of the inclusion of Muay Thai into the Asian Games is very high because our sport is already recognized worldwide and included in many sports events,” Dr Sakchye said.

“We have passed through the initial steps and now we are just waiting for the OCA’s reply.

“Actually, Muay Thai should have been included in the Asian Games sooner than this, but the previous political conflicts in Thailand delayed our process.”

Tourism and Sports Minister Kobkarn Wattanawrangkul voiced her support for the bid and said that she saw no barriers impeding Muay Thai’s inclusion at the next Asian Games.

“Now that Thailand is at peace, and we have great support for Muay Thai to be incorporated into the Asian Games, there should be no problems. Muay Thai should be able to go all the way,” she said.

Stephan Fox, vice president of the WMC, praised the support Muay Thai has received from the top officials.

“The support from the government and other organizations in Thailand plays an important factor in making Muay Thai an International sport,” he said.