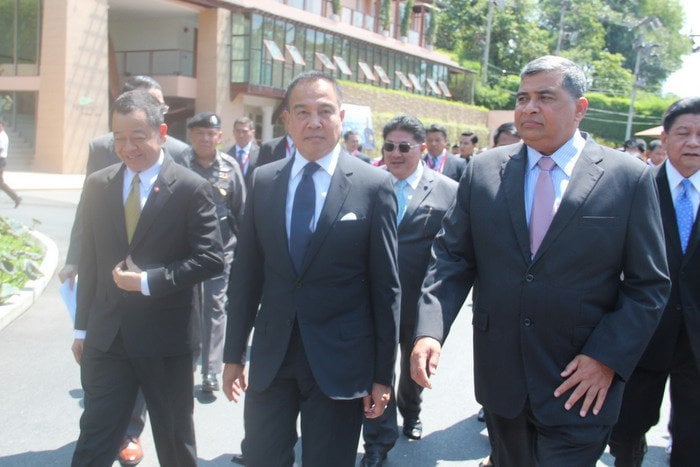 PHUKET: Malaysia’s top cop has agreed to fully co-operate with the Royal Thai Police in hunting down and arresting human-trafficking bigwigs who are believed to have fled to Malaysia.

“We believe that there are several suspects wanted for human trafficking who are hiding in Malaysia,” said Royal Thai Police Commissioner-General Somyot Poompanmoung at the 23rd annual Departmental Review of Joint Thailand-Malaysia Working Committee Meeting on Criminal Activities, held yesterday at the Westin Siray Bay Resort.

“Therefore, we request full co-operation of Malaysian authorities to apprehend the fugitives.”

Inspector-General of the Royal Malaysia Police Tan Sri Dato’ Sri Khalid bin Abu Bakar confirmed that Malaysian authorities will do everything they can to help.

“We will work with Thai police to send anyone involved who is found to be in Malaysia back to Thailand,” he said.

Gen Somyot expressed his optimism that the traffickers would be swiftly brought to justice, as the police had already obtained warrants for their arrests.

“More than 60 arrest warrants have been issued since January for suspects involved in the international traffficking ring,” Gen Somyot explained. The general did not disclose any names, specific whereabouts or home provinces of any of the suspects.

“More than 20 have been arrested already. We are searching for the rest. Some are in Thailand and the others are believed to be in Malaysia.”

Southern Thailand has been in the spotlight since the discovery of human trafficking camps and mass graves in the Thai-Malaysian border province of Songkhla earlier this month.

The first of the mass graves was discovered on May 1 near a camp that had held about 200 to 300 Rohingyan migrants, who were smuggled into the country (story here).

More graves were found in a second camp on May 4 (story here), prompting Prime Minister Prayut Chan-o-cha to warn of tough action against any state officials linked to human trafficking.

The popular tourist island of Koh Lanta has since been tagged as a potential trafficking hotspot, which prompted a search of the island on May 8 (story here).

The push to tackle human trafficking follows an order from the National Council for Peace and Order (NCPO) to counter the illegal trade, an effort which was ramped up after Thailand was named by the United States as among the worst countries in the world for trafficking (story here).

Thailand was downgraded to Tier 3, on par with Malaysia and Gambia, in the US State Department’s Trafficking in Persons (TIP) report last year for failing to take steps to prevent the illegal trade.

The Malaysian police chief confirmed at the meeting yesterday that human trafficking is a problem for both Malaysia and Thailand.

“Thailand and Malaysia have been exchanging information and evidence for a long time now. We have been keeping a close eye on this issue, and we will continue to do so,” he said.

“We cannot solve this problem alone. Malaysia is the final destination for these trafficked people, and they pass through Thailand to get there.”

Also at the meeting yesterday, Gen Somyot and his Malaysian counterpart signed a Memorandum of Understanding in which the two countries agree to work together to combat transnational crimes.

“This is a representation of promised, continued co-operation between Malaysia and Thailand,” Gen Somyot explained.