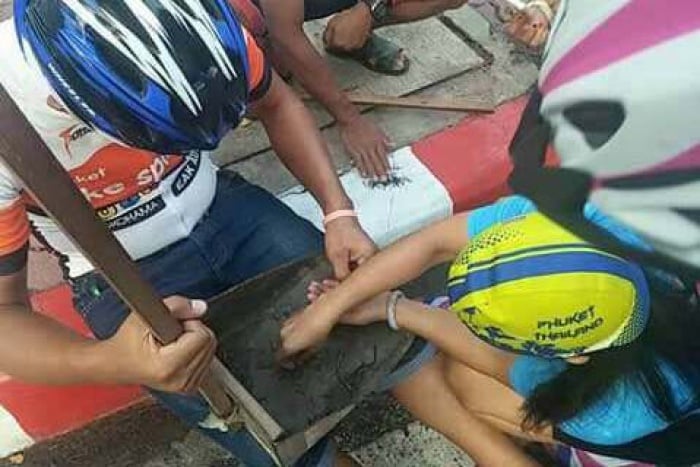 PHUKET: Island officials are searching for the culprit – or culprits – who left more than 100 nails in the bicycle lane at Saphan Hin, resulting in three punctured bicycle tires this week.

A group of cyclists noticed the scattered nails when one of their bikes’ tires deflated while the group was riding on the path on Tuesday.

“We didn’t think anything of it that first day, then two more bicycle tires were punctured the next day. We stopped our ride and ended up finding 143 nails in the cycle lane,” said Sukanya Sairayah, one of the cyclists.

“When I got the call yesterday, I told the cyclists that I would send a municipality employee to clear all of the nails from the road,” said Mr Kawee.

“However, the cyclists told me to just send a broom and they would do it themselves.”

The Phuket Provincial Administration Organization (PPAO), which is responsible for Saphan Hin’s CCTV cameras, is checking footage from yesterday and Tuesday to see if any suspects can be identified.

The cyclists took the nail-dropping debacle as an opportunity to raise concerns with the deputy mayor about cars parking in the bicycle lane and endangering bikers in Saphan Hin.

“I would like Phuket City Municipality to address the issue of cars parking in the bicycle lane. It forces us to ride in the street,” said Ms Sukanya.

“Sometimes, cars come flying through and scrape our bikes. It is getting more and more dangerous as there are now more cyclists riding at Saphan Hin, especially in the morning.”

Mr Kawee confirmed to the Phuket Gazette that municipality officials are considering penalties for vehicles that park in the bicycle lane.

“For now we are just warning people not to park in the cycle lane until we can figure out a better solution, which we hope will be soon,” said Mr Kawee.