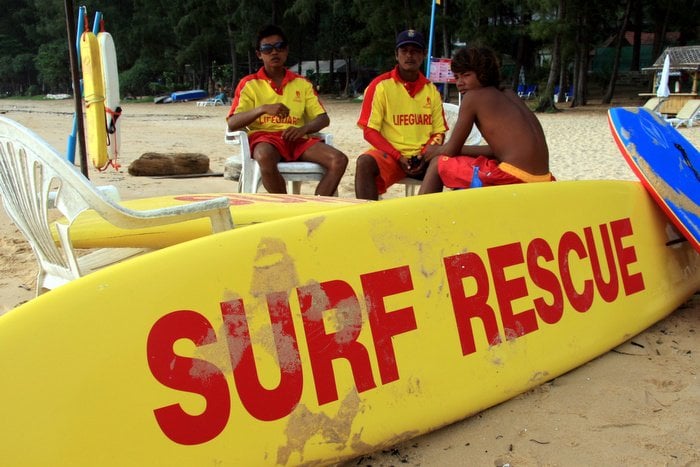 PHUKET: The Phuket Lifeguard Club (PLC) will sign a new contract tomorrow and lifeguards are expected to return to Phuket’s beaches by next Wednesday, just as the southwest monsoon season and corresponding dangerous sea conditions take hold.

This year, the contract stipulates that there will be a total of 95 employees: 83 lifeguards, nine chief lifeguards and three managers. There will be 38 different lifeguard stations on the island.

“If the process goes smoothly when all parties sign the contract, lifeguards should be able to go back to the beaches by May 20,” said Nararit Touyon from the Tourist Department of Phuket Provincial Administrative Organization (PPAO) today.

PLC President Prathaiyut Chuayuan confirmed to the Phuket Gazette that lifeguards would soon be back in their places on the sand.

“I will sign the contract tomorrow. If there is no problem, we will go back to work on Wednesday and do our best to keep everyone safe as the monsoon season begins,” he said.

The beaches have been unguarded since March 27 (story here), after no one came forward to bid for the annual 22-million-baht concession for private operators to provide lifeguard services (story here).

While the beaches were unmanned, the monsoon seas claimed the life of 20-year-old Panya Lonraphat at Nai Harn on May 5 (story here).

Mr Panya’s death prompted his relatives to pen an open letter to the National Council for Peace and Order, asking the government to review a way to end the annual contract-expiry pattern which leaves tourists and locals alike to fend for themselves during a dangerous time of year.