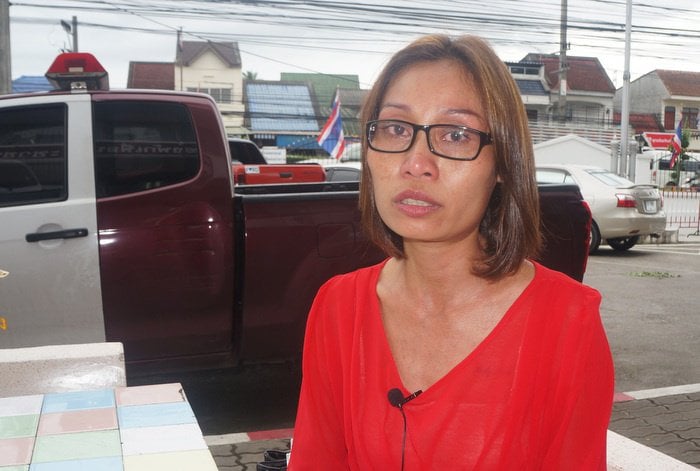 PHUKET: The distraught mother of a 7-year-old girl who was killed after their pick-up truck crashed into a Phuket sinkhole continues to demand justice, as well as 10 million baht in compensation for the tragic accident last year.

Nitikarn Rotrattanachai, who previously went by the name of Phakamon Duangchayatemcharat, arrived at the Thalang Police Station yesterday afternoon to follow up on a complaint of co-negligence causing death or serious injuries against those involved in the case.

“It is terrible to be negotiating this case. Money is nothing in comparison to my daughter’s life,” Ms Nitikarn said. “Hearing that the police have not dropped the case, but in fact are expecting to hand it over to the Public Prosecutor soon, is very heartening.”

The 10m-baht compensation was determined from a calculation that took into account Molly’s trajectory in life. It was estimated that she would earn 50,000 baht a month following her graduation from a university after finishing at Kajonkiet International School Phuket and would then work from the age of 25 to 60, explained Ms Nitikarn.

“Molly’s father gave up on finding justice for our daughter due to what seemed like a lack in progress. I am fighting this battle with only the support of my family and friends,” Ms Nitikarn said.

“I’ve changed my name and even tried to kill myself many times since the accident. I cry every night. I really don’t want to live any more.

“Deep down inside I feel like I am the one who killed my daughter, and it hurts so badly.”

At about 9pm on December 11, seven-year-old Molly Anne Bailey and her mother crashed into a massive sinkhole in the middle of the road in northern Phuket (story here). Molly was rushed to hospital and put on life-support. However, with no chance of recovery, her parents decided to let her go (story here).

The sinkhole started to form one month before the accident when heavy rains washed away part of Rural Road 4008 off Thepkrasattri Road, near Bang Jo Prison in Srisoonthorn (story here).

“I am deeply sorry for what happened and have advised Ms Nitikarn to file a complaint so that the case can go to court and a judge can decide how much the municipality has to pay,” Mr Worawut told the Phuket Gazette. “We simply can’t pay that much money to the victim. We only have the authority to pay a small amount.”

Mr Worawut went on to emphasize that the municipality had not abandoned the case, and asked that both Ms Nitikarn and society at large understand that such compensation went beyond their responsibility.

Col Boonlert Onklangm of the Thalang Police confirmed that the case would be handed over to the Public Prosecutor in about a month.