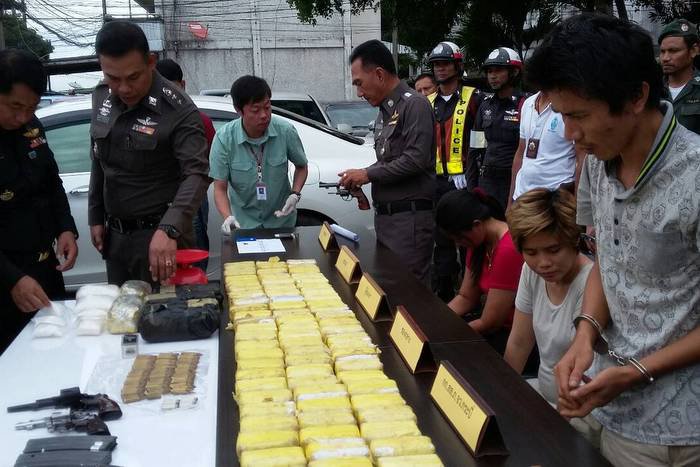 PHUKET: Krabi Police tapped in to a big-time prison drug network this week with the arrest of three major dealers in possession of 180,000 ya bah (methamphetamine) pills and more than 7 kilograms of ya ice (crystal methamphetamine), with a street value of about 40 million baht.

The string of arrests began on July 17 when 39-year-old Chawalit Limpanit was stopped at a checkpoint in Krabi Town for not wearing a helmet and was found with 80 pills of ya bah and an illegally possessed .38 handgun, Krabi Vice Governor Narong Wonsiv said in a press conference yesterday.

“During questioning, the suspects named their dealers as husband and wife team Surasak Thangkam, 32, and Kullarat Wachariseawin, 35.”

Police then set up a sting operation on Monday at Robinson shopping mall in Trang and arrested Mr Surasak and Ms Kullarat in possession of ya bah.

“Officers took the suspects to their home in Trang and found 180,000 ya bah pills and 7.1 kilograms of ya ice during a search of the premises. They also found a .22 handgun and corresponding ammunition,” said V/Gov Narong.

“The suspects then named their supplier as Ajchara Pawthong, 36, and provided police with her address in Trang. Ms Ajchara allegedly works with her husband, who is currently incarcerated at Khao Bin Central Prison in Ratchaburi, to order the drugs.”

Police then tracked Ms Ajchara down at her home and arrested her later on Monday.

Mr Chawalit, Mr Sakkariya and Ms Sawapak were not presented at the press conference yesterday, as they are already in the custody of the court, V/Gov Narong noted.

“Ms Ajchara denied the charges, but Mr Surasak and Ms Kullarat accepted them.”