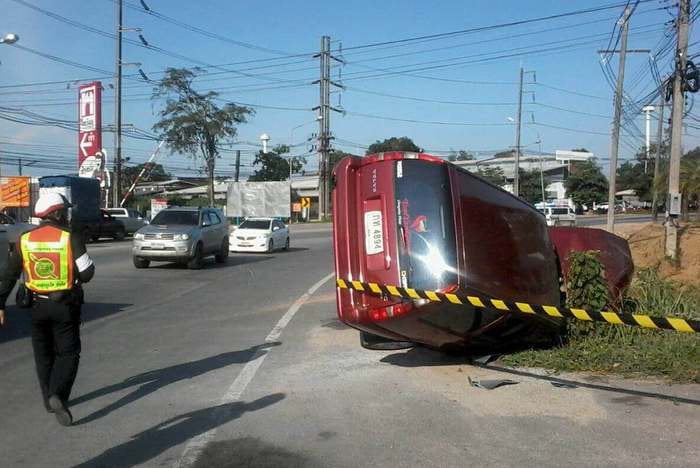 PHUKET: Police are searching for two men who fled the scene of an accident which downed a power pole on Srisoonthorn Road near the Heroines’ Monument yesterday.

Witnesses of the accident notified Thalang Police at about 4pm.

“At the scene, we found a seriously damaged station wagon flipped onto its side next to a collapsed power pole,” said Lt Suporn Muangkhai of the Thalang Police.

Police searched the car and found an ID card belonging to Chamnan Intham, 48.

“Witnesses said that the car was driving at high speed from Cherng Talay toward the monument when it lost control, crossed over into the oncoming lane and smashed into a power pole on the side of the road,” said Lt Suporn.

“The two men then escaped from the car and fled the scene.”

The car was taken to Thalang Police Station.

“We are attempting to contact Mr Chamnan so that we can question him about the accident. The driver of the car will face charges of reckless driving causing property damage,” Lt Suporn said.