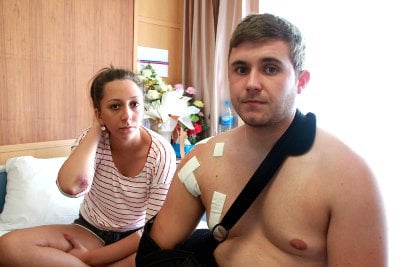 PHUKET: The two youngsters charged with the vicious attack on a British couple on holiday in Krabi last month have yet to stand trial, the Phuket Gazette learned yesterday.

Lt Col Niwat Pimket of the Ao Nang Police, who is the leading investigator into the attack on British tourists Jack Cole and April Clifton, yesterday told the Gazette that both teenagers had been presented in court and charged with gang-attack causing serious injury and carrying a knife as a weapon in public, but the pair had yet to stand trial.

“I’m waiting for documents relating to the 17-year-old suspect [who cannot be named for legal reasons] to be provided by the Krabi Youth Observation and Protection Center,” said Col Niwat.

“I expect to receive the documents, which detail the 17-year-old’s background, soon; then his case can be tried in court,” he added.

The case against the other teenager charged over the attack, Anusorn Kullak, 18, is ready, but his trial must wait as the charges against the two men have been presented to the court to be heard as the same case, Col Niwat explained.

“In the meantime, he is currently being detained at Krabi Provincial Prison,” Col Niwat said.

The news follows Mr Cole and Ms April Clifton appearing in an in-depth report in leading UK newspaper The Sun. The report stated that, “They were found guilty and jailed for three and ten years respectively. Three others have been arrested, but so far there have been no more convictions.”

However, Col Niwat explained that only two suspects were even charged, let alone tried, as Mr Cole could positively identify only two of his assailants.

The in-depth Sun report featured the headline, “We thought Thailand was paradise… now we are haunted by memory of [the]machete sex attack”, and a second headline “Stabbed as I saved lover from holiday rape gang”.

However, an exasperated Col Niwat reiterated that he was powerless to pursue any investigation into claims of attempted rape as not a single report he had received included any allegations of such an attack.

“I’m not sure why there are media reports saying the attack involved an attempted rape. I have not received any reports containing any information like that. Mr Cole and his girlfriend, and the suspects, have not mentioned anything like that at all. It was fighting, that’s all,” he said.

Col Niwat said the Krabi Police had received an email from Mr Cole thanking them for their efforts in handling the case.

“Mr Cole sent us an email via his friend saying that he appreciated what we’ve done and thanked us for catching the suspects and closing the case so quickly. He said that he would come back again, but the email also did not mention anything about an attempted rape or ask us to investigate [such an attack],” he added.

Mr Cole underwent surgery in Phuket for the serious injuries sustained in the attack – deep cuts to his temple, chest, right shoulder and right arm.