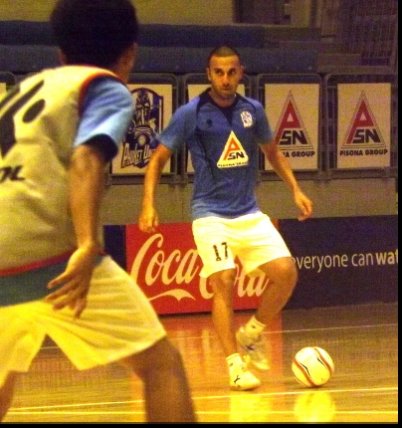 The match will be played at Phuket Town’s brand new, 4,000-seat Indoor Sports Complex in Saphan Hin with a 7pm kickoff.

It will be the third fixture of the TFPL 2012-2013 season, and Phuket currently sit in sixth place after losing their opening match 2-1 to Highways Department, and winning their last match, 3-0 on Wednesday in Samut Prakarn.

The Andaman Pearl’s next opponents, Bangkok, are currently in 2nd place of the 16-team league after winning both of their opening matches – against Lampang United 3-1, and then 6-1 over Samut Sakhon.

Ahead of tonight’s match up, Phuket’s new Brazilian signing, Jackson Santos, told the Gazette: “Bangkok looks like a good team, but we have the home advantage. It will be a tough game, and we will concentrate and focus on the goal, which is to win.”

Also speaking to the Gazette last night at the team’s training session, Phuket’s returning Brazilian star, Rogerio Moreira, who said, “We have been working hard, and it is very important for us to win at home.”

Asked about how he felt returning to Phuket, Moreira was a bit down, replying that he dearly misses his wife, children and family in Brazil.

“It’s very torturing for me to be away from my family like this. They were supposed to join me right now, but we still have not settled such matters with the team, which is frustrating.” he said

“Either way, I will concentrate on winning the match tonight, and then talk to the team president afterwards… ”

The 29-year-old was named Most Valuable Player of the CAT Championship national futsal tournament, in which Phuket were crowned both Southern region and National champions, which thus granted the team its first ever berth in the elite Thailand Futsal Premier League.

Despite subsequently getting the backing of former Phuket Governor Tri Augaradacha, who vowed to help the team by all means, since they had ‘created a sporting reputation for the province’, the team faces new hurdles this year.

Club Director Samak Rattanadilok Na Phuket told the Gazette: “Some officials at the city municipality have not not been the most cooperative and supportive with us about using the new facility.

“They still have misunderstandings about the sport and don’t want us to use the court because they said our shoes will damage the floor… Yet, they did not pose this problem for basketball, volleyball, or any of the indoor sports, including futsal, played in the sports complex at this year’s National Youth Games, for example.”

“We have gotten clearance for this initial game, but still need to inform and convince those officials that futsal is like every other indoor sport and that it won’t damage the floor.

“We have proposed to take them [the uninformed officials]on an all expenses-paid tour to see other futsal facilities around the country that use the same type of floor without any problems.

“And if they still don’t cooperate, we’ll be forced to invest in a special kind of matting which would cost us two million baht. This will be an unnecessary expense.”

Mr Samak added that the team had to spend nearly 100,000 baht just rent the facility for tonight’s game.

“This includes the facility rental fee, electricity use and wages of facility staff. We have to sell 1,000 tickets per game just to break even.

“This, of course does not take into account monthly salaries for our players and staff, which is about 700,000 baht. Sponsorship is the only way we can survive,” he added.

Tickets for tonight’s match are only 100 baht, while team shirts will be available for 690 baht.

If you’re in town, the Gazette extends the invitation to come out and support the home team in their Thailand elite league home debut.

Other TFPL matches this weekend: