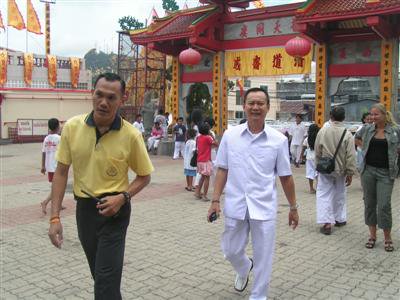 PHUKET CITY: Phuket Governor Niran Kalayanamit yesterday celebrated the first official day of the Phuket Vegetarian Festival like thousands of other Phuket residents, by dressing up in white and enjoying a meat-free meal at a local shrine, in this case the Jui Tui Shrine on Soi Phuton.

Gov Niran intends to refrain from meat and observe other rituals throughout the 10-day festival, which kicked off late Sunday afternoon with the traditional raising of ko teng poles at the many participating shrines in Phuket City and in Kathu, where the festival has its roots back to the tin mining era in the early 1800s.

The governor plans to visit all nine participating shrines over the ten-day event, which this year ends on October 7.

In a related development, Natjarong Ekpermsup, leader of the Phuket Watch group, confirmed he and other local supporters of the anti-government Peoples Alliance for Democracy (PAD) have suspended activities for the duration of the Vegetarian Festival.

The group earlier moved its low-key protest activities from Phuket Provincial Hall back to Saphan Hin, where a large screen was set up for supporters to monitor their counterparts in Bangkok by watching broadcasts aired by the ASTV network.

American assault victim thinks she has found her attacker

Are you ready to Walk & Run?