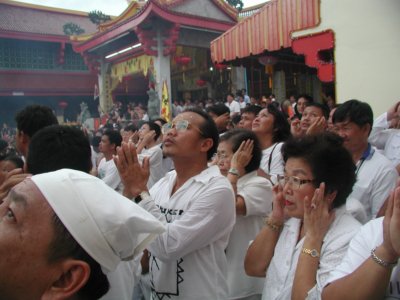 PHUKET CITY: Organizers of this year’s Vegetarian Festival have asked for those taking part to wear yellow shirts on the second day of the festival, October 23, to commemorate HM King Bhumibol Adulyadej’s Diamond Jubilee.

Participants traditionally wear white throughout the festival as a sign of purity.

The announcement came during a meeting of the event’s organizing committee at Phuket Town Inn.

This year’s festival, which runs from October 22 to 30, will once again feature a stage set up at Saphan Hin, the traditional center of activities. One of the largest street processions will be a walk from Queen Sirikit Park to Saphan Hin, starting at 1:29 pm on October 23, with vegetarian fare to be served along much of the route.

K. Suwalai said she expected this year’s festival to the biggest and best ever, as it falls in the year of HM The King’s Diamond Jubilee.

K. Prasert said the official start of the festival would be at 5am at Saphan Hin.

Seventeen shrines are expected to join the festivities, which will include a special ceremony for HM The King at 5:45pm at Saphan Hin on October 23.

Those attending will be expected to kneel for one hour, he said.