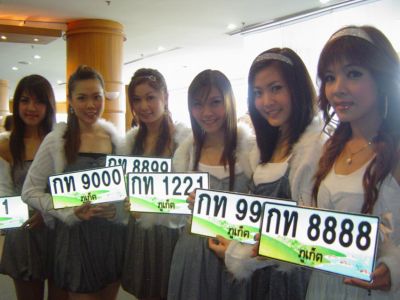 Bidding kicked off at 9:30 am Saturday in the Phrapitak Grand Ballroom of The Metropole hotel, where a line of professional presenters – attractive young women in revealing outfits – displayed the highly-sought-after plates to registered bidders, including a small number of foreigners.

The event, organized by Punneung Co Ltd, was chaired by Chairat Saguancheu, Deputy Director-General of the Department of Land Transport.

The alphanumeric plates for Phuket in 2008, which bear an image of Laem Phromthep, began with the two Thai letters ก (gor-gai) and ท (tor-tahaan), followed by strings of anywhere from one to four digits.

The most highly-sought after plates, for which opening bids were 50,000 baht, were numbers with the same digit four times in succession.

As most bidders were keen believers in Chinese geomancy, the top bid, as expected, was for plate กท 9999.

The winner was local hotel magnate Wanrak Likhidvong, with a high bid of 740,000 baht.

All 301 plates on offer were snatched up by luck- and vanity-seeking bidders.

The lowest bid during the auction, which ended at 3 pm on Sunday, fetched 19,000 baht.

The proceeds will go to the Road Safety Fund, with 40% returned to Phuket to fund repair and replacement of road lights, signs and other traffic infrastructure.