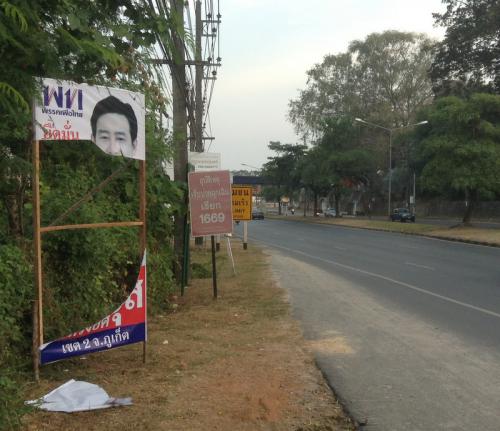 “The signs we put up in front of Wat Sapam temple and the entrance of the Dalaburi Villa were damaged on Monday night. Some of them had been cut along Mr Jirayus’ face and others were completely destroyed.”

About 300 posters were set up in Thalang, Kathu, Rassada and Koh Kaew on Monday, explained Mr Vithiwat.

“While the team was working in Baan Manik, protesters approached them, saying they did not want to see election posters in that area.”

“Our lawyer filed a complaint with the Phuket City Police. We have also asked nearby shop owners for their cooperation in identifying the suspects as some of them might have CCTV footage.”

Mr Jirayus is the only candidate registered for District 2, after braving a hundreds-strong protest in front of Community Hall in Phuket Town on December 29 (story here).