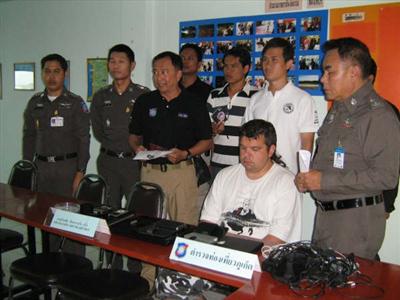 PHUKET: Police on Saturday announced the arrest of a Ukrainian man allegedly involved in the international distribution of child pornography over the Internet.

The suspect, 31-year-old Maxsim Shynkarenko, was arrested by Tourist Police on Friday at a luxury rented house on Saiyaun Road in Chalong.

He has denied the charges.

The arrest followed co-operation between the Tourist Police and two US government agencies, the US Immigration and Customs Enforcement Agency and the US Department of Homeland Security.

Mr Shynkarenko was arrested at a rented house, number 98/14, on the Saiyaun-Kata Road in Chalong Village 7.

The arresting officers presented him with a warrant issued by the Criminal Court less than a week before, on January 21.

Lt Col Ekachai Pramanakul, an inspector with the Region 5 Tourist Police, said Mr Shynkarenko was with two other men, both Caucasian foreigners, at the time of the arrest.

He did not attempt to resist arrest or flee, Lt Col Ekachai said.

Mr Shynkarenko is now in custody at the Bangkok Criminal Court, where prosecutors will arrange for his extradition.

There are no charges pending against Mr Shynkarenko for criminal offenses in Thailand, Lt Col Ekachai added.

Mr Shynkarenko, wanted on a warrant issued by US District Court of New Jersey, will face five charges, including distribution of child pornography and money laundering.

He fled the US after the warrant was issued.

Mr Shynkarenko allegedly made millions of dollars from his activities and had some 300 clients in many different countries.

Some of the images he distributed allegedly involved the sexual abuse of children as young as one year of age. He could face life imprisonment if found guilty by the New Jersey court.