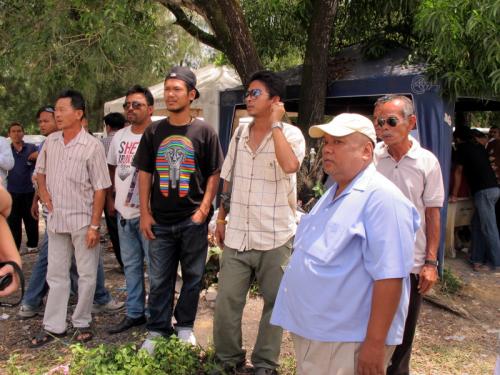 PHUKET: Following a breakdown in land transportation services yesterday that left sailors from the USS Nimitz waiting hours to enjoy their shore leave, the Phuket Marine Chief organized a meeting last night and negotiated a settlement between the transportation company contracted by the US Navy and local taxis.

“There was not a taxi blockade yesterday,” Phuket Marine Chief Phuriphat Teerakulpisut re-iterated, responding to earlier news reports that said taxis had blocked the sailors’ exit from the port.

“Everything stemmed from a financial dispute between GDMA and Blue Sea Tour Bus, who had been hired by GDMA to provide bus services.

“Blue Sea had been trying to collect 3 million baht from GDMA since last October. Despite lack of payment, they provided transport for the sailors on May 28 and 29, but when they still did not receive payment, they went on strike,” said Mr Narong, who is a relative of the Blue Sea Managing Director Alee Kumban.

The meeting between GDMA and Mr Narong took place last night at about 10pm. At that time, GDMA paid part of their debt to Blue Sea and agreed to pay the rest by June 1, Mr Narong said.

It’s not clear whether GDMA and Blue Sea will renew their contract going forward.

“If Blue Sea does not want to continue the contract, the right of service will go to the local taxis,” Mr Narong said.

GDMA in Bangkok declined to supply the Gazette with the number of their Phuket branch manager or any further information.