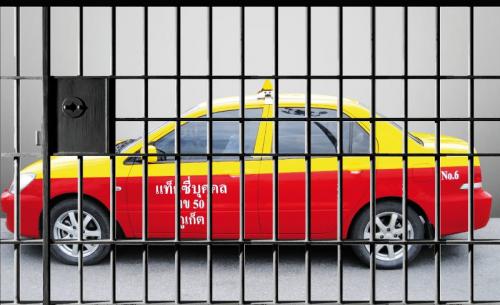 PHUKET: I saw many things of interest in Bangkok last week, including a woman riding a motorbike with a squirrel on her shoulder.

But the sweetest sights of all were the little red lights that peeped out here and there between tuk-tuks, trucks and cars on the busy streets of the capital.

They spelled out waang in Thai, or “free” in English, and they were on the dashboards of metered taxis.

In Bangkok, it is possible to see taxis in their native habitat, roaming the streets wild, foraging for customers.

The domesticated taxis of Phuket, for various reasons unable to look for sustenance themselves, live a captive lifestyle at the airport, big resorts and shopping centers on the island. Wherever they lurk, they find themselves hopelessly chained to groups.

With limited resources available, it’s no surprise that the drivers of unmetered taxis are forced by their owners to charge exorbitant fares, and fights over customers break out.

And it’s also no surprise that the drivers of metered taxis don’t turn on their meters. Why should they accept the chains of a meter and be forced to earn less than their unmetered colleagues?

Worst of all, because the taxis all gather at the tourists’ watering holes, they are not available on the streets of Phuket for travellers who need them.

The solution is clear. First, put a meter in every single taxi in Phuket. Serving the interests of no one, the two-tiered metered and unmetered system is simply unworkable.

Then apply a loitering law that prevents taxis from staying in one spot for long periods, fruitlessly waiting for customers. Let them run free and let them make money.

Imagine being able to step to the curb in Phuket Town and flag down a taxi to go anywhere on the island.

I’d use one to go to Central Festival, and avoid the struggle to find a space in the gridlocked car park there.

And if taxis were released into the wild, parking places at the airport would be freed up too.

Currently, tour vans and taxis of both kinds take up almost a third of the airport parking spaces, making it nearly impossible to find a spot, although I did once find a space there – at 5:45am. But when I returned from my trip, my car was blocked in by a tour van.

Last but not least, if taxis returned to the streets, with meters in place and turned on, the scam-factor would diminish considerably.

Phuket Opinion: The heart in darkness