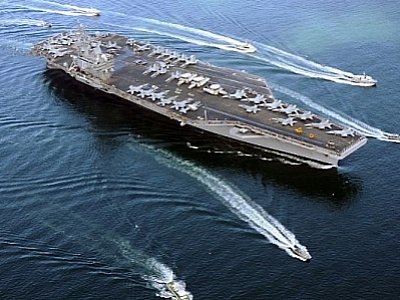 PHUKET: The first of four US Navy warships arrived yesterday, signalling the imminent landing of more than 5,000 US servicemen and women on recreational leave in Phuket this weekend.

Douglas Robinson, Assistant Attache, Force Protection Detachment at the US Embassy in Thailand, met Phuket Governor Tri Augkaradacha at Provincial Hall yesterday to formally inform him of the convoy’s arrival.

The USS Gridley arrived at Phuket Deep Sea Port at Ao Makham with about 300 sailors on board. The ship will put to sea early next week.

All three will depart Phuket late in the week.

“The main thing I want to tell you is that Phuket is our favorite place for R&R,” Mr Douglas told the governor.

“I had the opportunity to talk with a lot of business owners in Patong because that is where a lot of our people go to spend time. And I just relayed that there are two big reasons why our ships are able to come here and enjoy it so much,” Mr Douglas said.

“The second reason is safety and security. We have a lot of people here who look after us. For both those things we are very, very grateful,” Mr Douglas added. In closing the meeting, Mr Doughlas gave Gov Tri a traditional command coin of Carrier Air Wing Fourteen, which is stationed on board the USS Ronald Reagan.

Not once during the 15-minute conversation did Mr Douglas or Gov Tri mention the blockade by local taxi and tuk-tuk drivers that prevented US Navy sailors from taking their own transport to Patong the last time they landed in Phuket, in June last year.