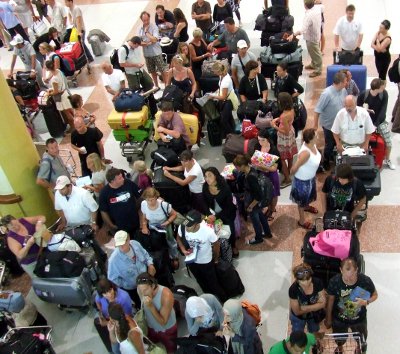 PHUKET: Phuket is enjoying record numbers of foreign tourists in 2011, according to official statistics.

The number of international passengers arriving at Phuket Airport January through March totaled 654,009, up 25.1% over the same period in 2010, according to the Tourism Authority of Thailand (TAT).

From April 1 through 23 April, international passengers arriving at the airport totaled 123,934, up almost 31% over the same period last year.

The announcement followed a TAT “familiarization trip” that saw members of the Bangkok press and tour agents treated to a four-day excursion to sample TAT award-winning tourism products on the island.

Meanwhile, Airports of Thailand (AoT) has announced that the first phase of its expansion project at Phuket Airport is expected to be finished in September, just in time for the next tourism high season.

AoT Board of Directors chairman Tirapol Noparumpaat led a meeting of the AoT board at the Sea Pearl Villas Resort in Kathu following an inspection tour of the airport yesterday.

All of the improvements underway are geared at facilitating passenger movement through the airport.

These include increased seating capacity in the departure lounges, improvements in the baggage collection system, better security including installation of more CCTV cameras and improved detection capability at the passenger walk-through gate.

The plan also includes some rare good news for smokers: there will be an upgrade of the smoking room in the international departure lounge.

Passenger traffic at the airport in fiscal 2010 (October 2009 through September 2010) increased 13.9% over the previous year, while flight traffic was up 18.9% over the same period, according to AoT figures.

The airport currently has 36 airlines using the facility, including five charter carriers.

Phuket Airport now has flight services to 60 destinations in 23 different countries, according to AoT.