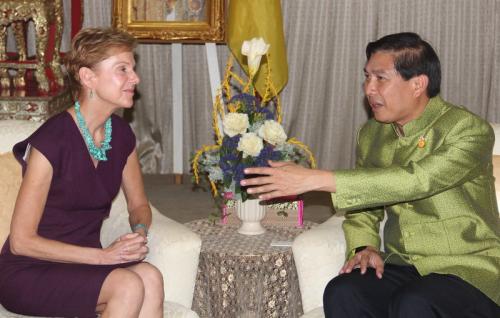 PHUKET: US Ambassador Kristie Kenney praised an array of aspects of Phuket during her one-day outreach trip to the island yesterday.

“I am very thankful for every Phuket police officer. I am aware of how hard your work is, especially as Phuket is a tourism city and you have to take care of not only Thai people, but also foreigners,” Amb Kenney said to Provincial Police Commander Choti Chavalviwat in front of the press at Phuket Provincial Police Station.

Regardless, Gen Choti pointed out, “American people are not among those who cause a lot of problems in Phuket.”

Amb Kenney replied, “Thank you for taking good care of American citizens in Phuket. Although some incidents might have caused a negative image of Phuket in some people’s eyes, I totally understand that you did your best and tried your best to help. It was just out of your control.”

Gen Choti, Phuket’s top ranking police officer, thanked the US Embassy for having arranged training last month for officers on how to prevent credit card fraud.

“The training was very beneficial to us,” he said.

After thanking Phuket Governor Maitri Inthusut for taking care of the sailors of the USS Nimitz during their shore leave last month, Amb Kenney praised the beauty of the island as a tourist destination, saying that it was a “perfect union between city life and the beauty of nature”.

“We will do our best to take good care of American citizens in Phuket. The US Embassy can contact me directly next time for any help,” Gov Maitri said.