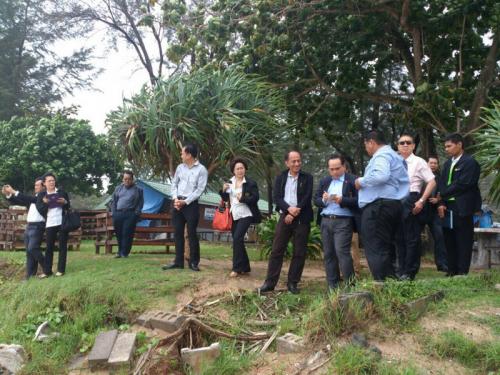 PHUKET: A fact-finding tour of Phuket’s top west coast tourist beaches yesterday identified encroachment by hotels, resorts and restaurants as the top concern among members of the Senate Standing Committee on Tourism.

The tour of beaches began at about 8:30am, led by Phuket Senator Tunyaratt Achariyachai, who is also the chair of the Senate Standing Committee on Tourism.

Due to current wet weather, the sortie stopped and took only cursory notes of the conditions at Laem Singh Beach, Nai Thon Beach, Bang Tao Beach and Kalim Beach as they drove past en route to inspect the beaches on Phuket’s southern west coast.

“The inspection tour of Phuket’s main tourist beaches was designed to allow us to gather information ahead of a meeting with the Tourism and Sports Minister Somsak Pureesrisak [to be held today],” said TAT-Phuket director Chanchai.

“The biggest problem we have seen so far is hotels, resorts and restaurants encroaching on beach land,” he said.

“We will raise the issues uncovered at the meeting with Mr Somsak,” Mr Chanchai said.

The meeting today will start at 9am at the Kata Beach Resort and Spa, he added.