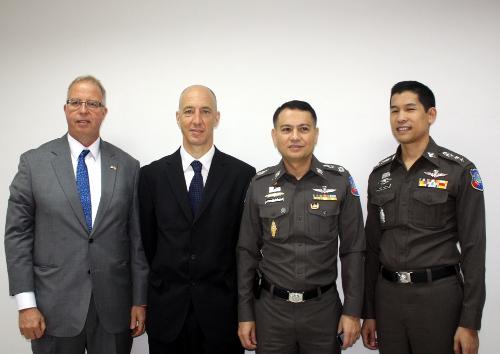 This morning, Ambassador Kent and British Consul Michael Hancock focused their talks with Phuket Vice Governor Sommai Prijasilpa on what measures authorities have taken to help protect tourists on holiday in Phuket.

“We are aware of the importance of tourists’ safety and have set up tourist assistance centers across the island and installed CCTV cameras in many areas of Phuket,” Vice Governor Sommai told the Phuket Gazette after her meeting with the British dignitaries.

“We have also taken steps to resolve the problem of illegal taxis and have established standard fares for taxi services on the island,” she added.

V/Gov Sommai expressed her gratitude for the personal visit by the embassy chief.

“Mr Kent and Mr Hancock also said they were willing to give any kind of help or support to us that they could,” she said.

“We talked about the problems – and possible solutions – concerning the issues that affect tourists; not just British or Canadian nationals, but all tourists,” said Tourist Police Commander Roy Ingpairoj, who travelled from Bangkok expressly to join the ambassadors during their visit.

“The Phuket Tourist Police serve every tourist who is involved in an accident or is in trouble. It does not matter what country they are from,” Maj Gen Roy said.

Ambassadors Kent and Culvert are scheduled to join Ambassador Joan Boer of the Netherlands in a meeting with Phuket Governor Maitri Inthusut tomorrow to continue their talks on tourist safety.