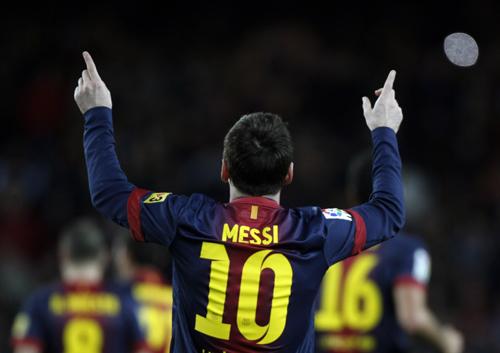 PHUKET: Lionel Messi, still only 25, was named the world’s best player for the fourth time in a row last night after a year in which finally produced his best form for Argentina as well as Barcelona.

Messi was handed the award after a typically cheesy ceremony which featured a performance from a giant dancing armadillo named Fuleco, the mascot for the 2014 World Cup in Brazil.

Spain’s Vicente del Bosque won the coach of the year award in a poll where FIFA bafflingly failed to look beyond coaches based in Europe.

Herve Renard, who led Zambia to a poignant and highly unlikely win at the African Nations Cup one year ago, and Tite, coach of South American and world club champions Corinthians, both failed to make the original shortlist of 10 coaches.

Del Bosque’s two rivals on the night were former Barcelona coach Pep Guardiola, who is currently on a one-year sabbatical and won only the King’s Cup last season, and Real Madrid’s Jose Mourinho, who won La Liga.

Brazil’s participation was restricted to the armadillo, a capoeira dance group that performed early in the ceremony and cameo appearances from former forward Ronaldo and national team coach Luiz Felipe Scolari, who presented two awards.

The five-times world champions have not had a player in the final three since Kaka won the award in 2007, an unprecedentedly bad run for a country which once produced industrial quantities of world class footballers.

Their only representative on the 23-man shortlist this time was Santos striker Neymar, who finished 13th with 0.61 percent of the vote.