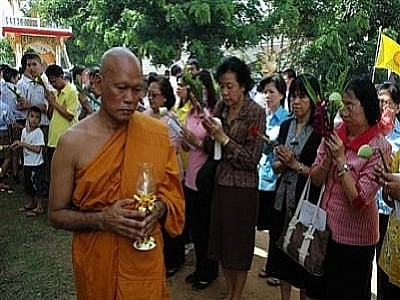 PHUKET: Retail sales of alcohol will banned in Phuket tomorrow and Friday, when Buddhists will celebrate Asarnha Bucha Day and Khao Pansa Day, the start of Buddhist Lent.

Provincial Police Deputy Commander Peerayut Karajedee confirmed to the Phuket Gazette today that alcohol sales will be banned on both days under the Prohibition of Alcoholic Beverage Sales Act of 2009.

“Thursday and Friday are marked as public holidays as well. All government offices will be closed on those days,” Col Peerayut said.

Violators are subject to penalties of up to six months imprisonment, a 10,000-baht fine, or both.

The only exceptions under the Act apply to sales in hotels, in accordance with regulations. The exception was put in place to “stimulate the tourism sector”, according to the ministerial announcement introducing it.

Asarnha Bucha Day, the full-moon day of the eighth lunar month, commemorates the Buddha’s first sermon to his first five disciples after attaining Enlightenment more than 2,500 years ago. Evening candlelit processions will be held in all Thai Buddhist temples.

Khao Pansa marks the beginning of the annual three-month “rains retreat” during which Buddhist monks customarily stay at a particular temple to study and meditate. The monks are not allowed to stay overnight at any other location during this period except under exceptional circumstances.

Sculpted beeswax candles, generally depicting mythological creatures, are carried in a ceremonial parade in each province before being presented to local temples.